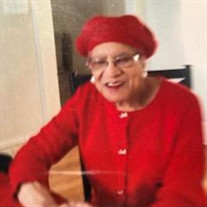 Dorothy Lee Dunham, affectionately known to family as “Momma”, “Grandma”, “Dot” and “Aunt Dot”, was the daughter of the late Charlie Gaymon and Alberta (Thompson) Gaymon. Dorothy was born on October 8, 1929 in Kershaw County, South Carolina and she was called home on June 26, 2021. Dorothy was the third of seven children and she received her education in Kershaw County Public School system. She learned early on the value of a relationship with Christ, love and family. One of her favorite expressions of love was when she would kiss and hug you as she tenderly said, “A bushel and peck and a hug around the neck”. In her early years, she mastered the art of cooking. If you knew Dorothy, then you knew your taste buds were going to be tantalized by her golden fried chicken, macaroni and cheese, cornbread and banana pudding. In 1950, while attending the “Big Time Revue” Dorothy met the love of her life, Elisha Dunham, and they later married on May 18th of that same year. From that union six children were born. In 1956, Elisha and Dorothy moved their family to Baltimore, Maryland where Dorothy worked for the Becker family until she was forced to retire by her kids at the age of 70. It goes without saying, she was a wise, loving, talented, witty, and extremely funny woman and her heart was pure as gold. Which is why everyone she came in contact with loved her. Dorothy’s love of family was endless and she extended that love from one generation to the next. She was a true matriarch and she relished in that roll effortlessly. Every generation after her six children have memories of her prize-winning pancakes and spending time at grandma’s house. She lived with her like grandchildren Sean, Shanieka, Shatiara, Yolanda, and Davonte, great-grandchildren De’Asia, Alasia, De’Sean and Auriel and great-great-granddaughter Harmoni Dorothy’s door was always open and you always felt at home. There is no one word to describe Dorothy, so we will just settle for PHENOMENAL. Although her family meant everything to her, Dorothy made sure to carve out her moments in time which included watching her soap operas, shopping with her oldest daughter Helen, doing her puzzles and word search puzzles, getting her hair done and going to WWE Wrestle Mania at the former Civic Center. In later years, she only watched wrestling on TV. Dorothy also loved music and you could sometimes find her cooking and jokingly singing along to Baltimore Club song or hip hop. Dorothy’s devotion to her family was infinite which is why as she became more dependent, her youngest daughter Kat stepped in as her primary care giver. It was a beautiful sight to see her family pamper her as she had always done for them. Dorothy was proceeded in death by her husband, Elisha Dunham, brothers, Willie Frank, Charles and Billy Gaymon, and sisters, Lillie Mae Bell, Nannie Reed and Betty Sue Bracey. Dorothy will truly be missed, but her life will continue to be celebrated with love by her brother, Curtis “Tank” Gaymon; sister, Annie Mae Jones; 6 children, Leroy Dunham, Helen Jean Dunham, Larry Dunham, Randy Dunham, Barbara Whetstone and Katherine Dunham; 2 daughters-in-law, Carolyn Dunham and Colita Dunham; 1 son-in-law, Damond Whetstone; 1 son-in-love, Warren Neal; 16 grandchildren, 3 grandsons-in-law, 2 granddaughters-in-law, 36 great-grandchildren, 7 great-great-grandchildren, a host of nieces, nephews, cousins, and endless friends better defined as extended family.

The family of Dorothy L. Dunham created this Life Tributes page to make it easy to share your memories.

Send flowers to the Dunham family.