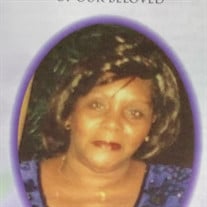 DOROTHY M. DESOUZA, born Dorothy M. Wilson, was born on Sunday, February 21, 1943, in Kingston, Jamaica, to Evadney McQueen and Wesley Wilson. Dorothy was affectionately known as “Ms. Lynn.” Ms. Lynn was born first, followed by several brothers and sisters: Pam, Audrey, Nesta, Bobby (Arthur), Everol, Alton, Keith, Huel, George, and Barry. Growing up, Ms. Lynn was a quiet child who bloomed into a teenager who loved music ranging from classic R&B, soul, and reggae. During these years, Ms. Lynn delved into her passion for sewing, which became one of her professions for which many knew her. Ms. Lynn became well known in her community on Bay Farm Road as a master seamstress. She took pride in her work and always aimed for perfection. Ms. Lynn’s artistry stems from doll clothes for her daughters Andrea and Debbie (Karlene) to hand-embroidered wedding gowns and bridal party dresses, such as one made for her cousin Jennifer. In 1978, Ms. Lynn emigrated to Canada in search of better opportunities. She lived in the Mississauga area until the early-1980s when she relocated to Florida. After living in Florida and giving birth to her son Stephen, she moved to New York City. In New York, Ms. Lynn lived in the Bronx and Harlem, where she created her delicious meals. Being in Ms. Lynn’s apartment, one would experience the aromas from various types of cuisine; her yearly tradition of baking enticing Easter Buns and Christmas cakes was an anticipated treat. On any given Friday night, she could be found watching WWE Friday Night Smackdown; she was an avid wrestling fan. Ms. Lynn worked overnight shifts at the Regency Extended Care Center in Yonkers, NY, for over 15 years as a certified nurse assistant. She was said to treat the patients under her care with compassion and attentiveness. Ms. Lynn also exhibited these traits with an abundance of love and protectiveness of her grandchildren Anthony (Wayne), Lexi (Alexis), and Taylor. After years of working, Ms. Lynn was able to purchase her retirement home and moved to Covington, Georgia in 2012. In Covington, she attended Salem Road Church of God, where she committed her life to Christ and was baptized in May of 2014. Her church family remembers her as being a pleasure; a kind-hearted, pleasant sister in Christ. Dorothy will be greatly missed by her family and friends. She leaves behind her children, Andrea, Debbie (Karlene), and Stephen; her grandchildren, Anthony (Wayne), Alexis, and Taylor; along with numerous nieces and nephews, including Junior, Vivian, Tracy, and Jerry who she help to raise.

The family of Dorothy Desouza created this Life Tributes page to make it easy to share your memories.

Send flowers to the Desouza family.