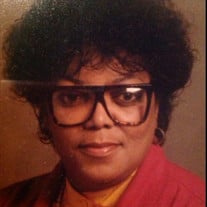 DORIS HARRIS, daughter of the late Edith Ricks-Meredith and the late Gilmore Jacob Meredith, was born on March 2, 1940 in Baltimore, Maryland. She departed this life on March 31, 2021 after a short illness. Doris received her education in the Baltimore City Public Schools including several semesters at the local Community College. She was employed in her younger years at the local Woolworth and Read’s drugstores in downtown Baltimore. She married the late Raymond Henry Harris on December 25, 1960, and out of this union five children were born: Kimberly, Raymond (Eric), Paul, Monica and Jason. She was like a mother to the late Donna Holman and one nephew Sean Meredith. Doris attended the former St. Martin’s Church in West Baltimore. She was employed in custodial work at the Federal Building until she later became employed at the Hutzler department store where she worked in retail at the cosmetics counter for over twenty years until closure of the store. Soon after she went on to work at the Hecht Company doing what she loved, makeup at the cosmetic counter and retail in the men’s department. Doris did another twenty-plus years until the store finally closed its local stores and switched over to the Macy’s department store. After more than 45+ years of dedicated service in retail, Doris decided to retire in 2006. Doris was very bright, an avid reader who had a big sense of humor– when she chose to, LOL. She had a special way to warm the hearts of all who knew her. She loved reading, especially Harlequin romance novels, doing crossword puzzles, coloring by numbers, watching/participating in Jeopardy and Judge Judy as she sipped on her favorite drink, Coca-Cola. She was also a huge fan of the Harry Potter series, which she often shared highlights with her niece Renee. Doris was very crafty in sewing, decorating and voicing her opinion about how you should dress and what was best fitting on you. After all, she did work in retail and always thought that she knew what was best. Many did not know that her favorite music genre was country. All who knew her thought Doris was such a lovely person with a big personality at 4’11 and a “half” inches tall (she would place an emphasis on the half inch - LOL). She was always well-dressed wearing a blazer with whatever she wore. This was her signature look, classy and well maintained and very ladylike with her favorite Dooney & Bourke handbag. We will remember her fondness of holidays, especially Christmas Day as she would be so excited to decorate and spent money to fit the occasion. She was the glue that kept our families together, always staying in touch with everyone. She will always be remembered as a lovely friend, a loving sister, a caring aunt and a devoted mother and grandmother. Doris was preceded by three sisters, Edith Meredith, Shirley Holman, Elaine Simmons, and one brother, Gilmore Meredith. She leaves to cherish her memory: two sisters, Irene Jones and Corine Jackson; her five children, Kimberly Paige (Mark Paige), Raymond Eric Harris, Paul Harris, Monica Bright-Jordan (Bernard Jordan Jr.) and Jason Harris; nine grandchildren, Amy Sutherland (David), Chaundra Bright (pre-deceased), Andre Harris (Kristian), Miles Bright Jr., Paul Harris Jr. (Cecelia), Marcus Bright, Madison Harris, Jackson Harris, and DeMarco Paige; four great-grandchildren, Naomi A. Harris, Zoey Harris, Zachary Harris and baby Sutherland due in the fall; a devoted sister-in-law, Mary Hamilton; three devoted nieces, Denise Stevens, Renee Moore and Damare Murphy; a devoted nephew, Sean Meredith; great-nephew, Tomari Meredith; and a host of other relatives and friends.

DORIS HARRIS, daughter of the late Edith Ricks-Meredith and the late Gilmore Jacob Meredith, was born on March 2, 1940 in Baltimore, Maryland. She departed this life on March 31, 2021 after a short illness. Doris received her education... View Obituary & Service Information

The family of Doris Harris created this Life Tributes page to make it easy to share your memories.

DORIS HARRIS, daughter of the late Edith Ricks-Meredith and the...