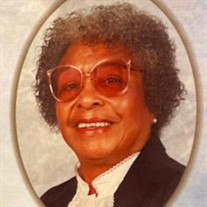 DORA MAE MCKINNON, beloved daughter of the late William H. Plummer and Ortrie Hazel Powell, was born on December 11, 1925 in Warren County, North Carolina. After a brief illness she suddenly departed this life on early Easter Sunday, April 4, 2021. She was educated in Warren County Schools and later moved to Baltimore, Maryland in 1941. Dora (affectionately called “Mumpsy”) was a devout Christian; she was known to rise early on Sunday mornings to attend Mt. Olive Freewill Baptist Church. She faithfully served there for over 20 years on the Missionary Board. She later joined Knox Presbyterian Church for fellowship where she became a member of the choir, “The Sounds of Joy”, The Golden Nuggets and the Sunday Morning Bible Study group. She was also a lifetime member of The Eastern Stars. On May 22, 1970 Dora married Lymus James McKinnon Sr. She worked several jobs to help support her seven children. You could always count on Dora to help with the grandchildren. She was very direct and was known for having a sharp tongue; she had no problem with telling you what was on her mind. She loved to have company and would schedule herself a ride and be gone about her day in a flash. She enjoyed talking to Faye, spending time with her good girlfriends Ms. Bea and Mrs. Satterfield, she had a standing lunch date with Bridget and was delighted to have Cee-Cee come over to assist her as needed. Matriarch of the family indeed; she will truly be missed. She leaves to cherish her memory: seven children, Clarence, Willie, Sonjia, James, Roosevelt, Sadie and Lymus Jr. who preceded her in death; three daughters-in-law, Brenda Alston, Carlese McKinnon and Elizabeth Alston who preceded her in death; one son-in-law, Thomas Jones Sr.; twenty-five grandchildren (six preceded her in death; forty-six great-grandchildren (one preceded her in death); a host of great-great-grandchildren; brother-in-law, Roy McKennon Sr. (Johnnie Mae) of Jacksonville, Florida; first cousin and best friend, Geraldine Powell; a host of nieces, nephews, cousins and friends.

The family of Dora M. McKinnon created this Life Tributes page to make it easy to share your memories.

Send flowers to the McKinnon family.