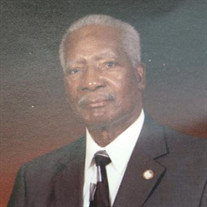 DONALD EDWARD WILLIAMS was born in Gastonia, North Carolina on October 8, 1934 to the late Edward and Willie Mae Williams. The family later moved to Baltimore, Maryland where Donald attended Baltimore City Public Schools and graduated from Frederick Douglass High School. Known to family and friends by the nickname “Poosum”, he departed this life on May 19, 2021 at Northwest Hospital. After graduation from high school, he joined the United States Army and served until his honorable discharge as a Private First Class. He accepted Christ at an early age and joined Enon Baptist Church in Baltimore. Donald had a brief marriage to Cecelia and was the proud father of two daughters, Gladys (deceased) and Deborah. Donald was an industrious man who “kept on the move” for over 30 years. He was a streetcar driver for Baltimore Transit Company and later drove for various companies, including New Penn, Davidson, and Kane. To stay active after his retirement, Donald drove part-time for Papa Auto Parts and that job gave him the opportunity make even more friends. No one was ever a stranger to him. He was blessed as an adult to meet his soulmate, Gretchen Walker. They shared a devotion to The Lord and strengthened their relationship by joining Epworth United Methodist Chapel together. On June 1, 1985, the Reverend Marcus Matthews united them in Holy Matrimony. Donald was a dedicated and stalwart member of the church as well as a dedicated member of the Usher Board. He was always present and ready to serve his usher team. As a result, Donald was often called to assist other teams, as he loved to help. Donald and Gretchen resided in Carriage Hill for decades and at any given time family would visit and share good times together. Because of his generous spirit and pleasant personality, all who were fortunate enough to know him loved him. When people asked how he was doing, he would say, “So so ... sticking together like wet dough.” He loved family, basketball, football, Greta’s cooking and calling 222-1211. Donald was always thankful for the small pleasures in life and loved to share a story, and add humor to it. The twinkle in his eyes was beautiful to behold, and at times his look said it all as he would lean to the side. In his last decade, Donald bravely endured various illnesses and it seemed Northwest Hospital became his “vacation/recovery home” after enduring multiple surgeries. On Wednesday, May 19, 2021, he peacefully said goodbye to all pain and suffering and went to his well-deserved reward. He fought the good fight. Donald was preceded in death by his parents, 1 daughter, and four siblings, Hazel, Warren, Robert, and Doris. His memory will be forever cherished by: his beloved wife of 35 years Gretchen Walker Williams; his daughter, Deborah Greene Irby (Rodney); three grandchildren; four great-grandchildren, great-great grandchild; brothers, Carl and Ronald Williams and sister, Carolyn Rawls; two sisters-in-law, Yvonne Booth (Theodore) and Carla Martindale; brother-in-law, Robert Shelton (Dorothy); and a host of nieces, nephews, cousins and devoted friends

The family of Mr. Donald Edward Williams created this Life Tributes page to make it easy to share your memories.

DONALD EDWARD WILLIAMS was born in Gastonia, North Carolina on...