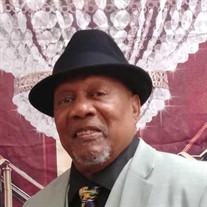 Donald Lee Jackson was born May 6, 1951 in Richmond Virginia to Walter and Dorothy Jackson who preceded him in death. He was also preceded in death by his sister Yvonne Jackson-Cotman. Donald Lee was called home to be with our Lord on March 8, 2021. Donald Lee was educated in Richmond Public Schools with perfect attendance from kindergarten through high school. He graduated from Armstrong High School, class of 1969. He also completed horticulture courses at the University of Richmond. Donald Lee was employed with Philip Morris and later with Henrico County Department of Public Utilities Solid Waste where he retired in 2016 after nearly 27 years of service. Don Lee was an avid bowler and a member of “VA Posse” bowling team. He was a die-hard Dallas Cowboy fan. Don Lee was a sharp dresser, and the life of the party. He recently became a member of Sons of the American Legion Squadron #144. Donald Lee leaves to cherish his memory four loving children: Dr. Decardra L. Jackson, Corey Lee Russell, Chelsea Jackson, and Maury Nicholas Williams; five grandchildren, Brianna Russell, Courtney Brown, Corey Lee Russell Jr., Comya Smith, and Ian Griffin; one brother, Walter Jackson Jr., beloved friend, Yvonne Daniel; a niece, Rhonda Page (Rod); nephews, Vershawn Jackson and Dwayne Jackson (Tierney); great niece, Brooke Jackson; life-long friends, Clyde Britton, Jerry Branch, Sylvester Brown, and George Page; a host of loving aunts, uncles, cousins, and friends. The harvest does not speak of an untimely cutting down of the grain; rather it speaks of it being in its season. Therefore, the life lived by our departed love one should not be viewed as untimely, but in it’s season, the season of God’s choosing. To live fully would involve growing physically, intellectually, and most of all spiritually to have a love and compassion for family. Embracing the appreciation for the one that gave life, gave provision, good or bad; realizing it all is granted possible through the blessings of Jesus Christ.

Donald Lee Jackson was born May 6, 1951 in Richmond Virginia to Walter and Dorothy Jackson who preceded him in death. He was also preceded in death by his sister Yvonne Jackson-Cotman. Donald Lee was called home to be with our Lord on March... View Obituary & Service Information

The family of Donald Lee Jackson created this Life Tributes page to make it easy to share your memories.