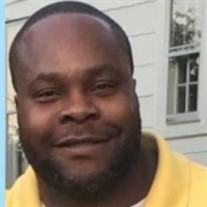 DOMINICK JAMAL CUNNINGHAM, affectionately known as “Doe Boy”, was born to Dewayne and Gladystine A. Cunningham. On November 27, 2021, after a short illness, he went to glory to live in paradise with his loved ones who preceded him. Dominick attended St. Ambrose and New All Saints Catholic Schools for his elementary and middle school years. For the last four years of his education he attended and graduated from Northwestern High School in 1998. Dominick was born into a loving, Christian family. At an early age, Dominick gave his life to Christ at Christ Deliverance Church, under the leadership of the late Dr. Rev. Martin Jacobs Jr. Dominick learned at an early age to be an entrepreneur. During the Preakness Races, he would go out with his father and Uncle Larry to assist people with their coolers and other belongings going into the track. As he got older he began helping “Big” (as he called his father) how to park cars for the race. He also worked as a landscaper with his childhood friend. In addition, he worked at Koons Owings Mills, detailing cars and he also transported patients to and from their doctors appointments. Dominick always popped up at family events when his time permitted. His warm hugs, big appetite was always welcomed. He had a love for fast and stylish cars which always had people in awe when he pulled up. He loved going on family trips. His last trip was to Vegas and he enjoyed it so much. He ziplined and rode the ATV’s in the desert. In addition to his love for his family and stylish cars, he loved his dog, and for the past six years his right-hand man was his dog, Governor. Dominick was the go-to guy and he was very easy to talk to and always willing to help you out within reason. His uncompromising loyalty and integrity were some of the strong attributes people loved about him. Being the only child, Doe had his “Crew” (Bone, KB, Crack, Coop, Mern, EVZ and Mr. URL) who were more like his brothers. His favorite football team was the Baltimore Ravens. It never had to be a special occasion for them to all get together, chill and sip on their favorite drink, Hennessy. Dominick was loved by many and his infectious smile would light up a room. His outgoing personality, wit and charm won the hearts of all. Dominick was preceded in death by his (maternal) grandparents Alvester and Odell Alexander, aunt Barbara, his (paternal) grandfather William “Peter” Foster, aunt Evelyn and uncle Donnell. Dominick leaves to cherish his life, love and legacy: his loving mother, Gladystine A. Cunningham; devoted father, Dewayne Cunningham (“Big”); his children, Ayana Cunningham and Dominick Jamal Cunningham Jr; two grandchildren, Rayshawn C. Jones and Raylyn C. Jones; his grandmother Mary Foster; five aunts Karen Alexander, Yolanda Alexander, Savannah Cunningham, Lydia McCray and Lyndora Thornton; four uncles, Carlton Alexander, Larry Alexander, Kenard Foster and Mandel Foster; twenty-two first cousins; his godmother, Vanzetta McCollugh; longtime soulmate and best friend, Shenna Watkins; a host of cousins, great-aunts, great-uncles and many friends.

DOMINICK JAMAL CUNNINGHAM, affectionately known as &#8220;Doe Boy&#8221;, was born to Dewayne and Gladystine A. Cunningham. On November 27, 2021, after a short illness, he went to glory to live in paradise with his loved ones who preceded him. Dominick... View Obituary & Service Information

The family of Dominick J. Cunningham created this Life Tributes page to make it easy to share your memories.