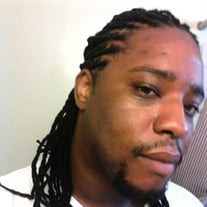 Dominic A. Banks, son of Wanda Phillips and Eugene Banks was born on September 5, 1982. Due to a long illness, Dominic transition to be home with the Lord on June 28, 2021. Growing up in Baltimore, Dominic was affectionately called Nic by his family and close friends. He was educated in the Baltimore City Public Schools System and received his High School Diploma from Stanford Online High School. Dominic, accepted the Lord in his life at an early age, he enjoyed going to church with his grandmother and he participated in many church activities. His early dedication to the Lord grounded his relationship with Christ. Nic, started working at an early age of 16, he developed a passion for working in the hospitality industry. He held various jobs, but his most prize employment was when he landed a job as a floor technician with Building Associates at Baltimore City Hall for many years, until his health declined and his was unable to perform his job duties. In August 2003, Nic met and fell in love with Tierra, as their love grew and their bond became stronger, Nic made the ultimate decision of marrying his only love April 6, 2006. Out of this union of marriage, three beautiful children were born, Dominic/Noodles, Dominque/Butter and to their surprise a miracle baby Dierra/ Daddy Biscuit. Nic, enjoyed cooking and earned the title of grill master, he was always willing to lend a hand with cooking for family functions. His love for cooking and baking enabled him to master some of his grandmother’s favorite dishes. Nic, enjoyed spending time with his family, this was important to him. He was a skilled video game player, he enjoyed playing games with his son, bonding with his girls and spending quality time with his wife. Nic was truly a family man, he was genuine, compassionate, he showed strength, he loved on everyone and was always displayed a happy spirit. Nic, proceeded in death, his grandmother Jessie Mae Phillips and Nancy Banks, Two uncles Larry and Dale Phillips, two aunts Kathy (Pinky) Phillips, Gwendolyn (Ba-Ba) Phillips. He leaves to cherish his devoted wife, Tierra Gaskins Banks, Children. Dominic/Noodles. Dominque/ Butter and Dierra/Daddy Biscuits, Parents Wanda Phillips and Eugene Banks, Siblings Damon and DaWon White, Mother In Laws Patricia Gaskins, Sister in Laws Tasha and Lee , Brother in-Laws Terrell and Sonny Grand Parents in Law Shirley & Amos Gaskins. 3 Aunts Elizabeth Randolph (Shug), Evelyn Epps (Jean) and Juanita Phillips (Neat), and Verna Banks one Uncle Herbert Phillips (Leon) and Jeffrey Banks, Best Friend John Jetter and a host of aunts, uncle nieces, nephews, cousin and friends.

Dominic A. Banks, son of Wanda Phillips and Eugene Banks was born on September 5, 1982. Due to a long illness, Dominic transition to be home with the Lord on June 28, 2021. Growing up in Baltimore, Dominic was affectionately called Nic... View Obituary & Service Information

The family of Dominic A. Banks created this Life Tributes page to make it easy to share your memories.

Dominic A. Banks, son of Wanda Phillips and Eugene Banks was...

Send flowers to the Banks family.