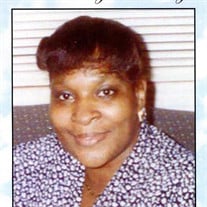 Dollie Ann Shaw, daughter of the late Emory Wade Shaw II and Annie Mae Shaw, was born on December 14, 1947 in Greenville, South Carolina. After a lengthy illness, Dollie departed this life on Wednesday, August 4, 2021. Dollie received her education from the Baltimore City Public School System. Shortly after receiving her High School Diploma Dollie began working at Keswick Nursing Home in the early seventies. Later in the early eighties she started working as a Private Duty Nurse. This new career was her passion and although she had many clients there were two families that she and her children grew fond of. Dollie work in this field until her health prevented her from continuing. Dollie was baptized as a Jehovah Witness on October 27, 1984 in Baltimore, Maryland. Dollie was affectionately known as “Dot” and “Hook” to her family and friends. She loved watching karate movies, playing Pinochle with her family, crocheting, chess, backgammon and baking homemade white potato pies. Dollie was big on family gatherings and always said what was on her mind. Dollie was preceded in death by her two grandfathers; two grandmothers; brother, Emory W. Shaw III; nephew, Andre’ Hopson; three aunts, Katherine, Sarah and Clara. She leaves to cherish her memories: sons, Lenard Shaw (Vonzella); Antwin Shaw; sisters, Helen Hopson (Carville); Mary Shaw and Shirley Godley (Marcellous); grandchildren, Khandice, Leonard and Deanna; great-grandchildren, Christopher, Karter and A’Miah. And a host of aunts, uncles, nieces, nephews, other relatives and friends.

The family of Dollie A. Shaw created this Life Tributes page to make it easy to share your memories.

Send flowers to the Shaw family.