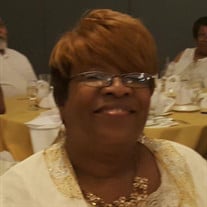 Diane was born October 10, 1955 in Baltimore, Maryland to the late Paul and Helen Pinkney who preceded her in death. There were five children from this union. Donald and Ronald Pinkney also preceded her in death. She peacefully passed from labor to reward early Sunday Morning, June 13, 2021. She was raised in Historic West Baltimore and attended Baltimore City Public Schools, graduating from Northwestern High School in 1973. As a child she was very outgoing, traveling the country with her parents. She furthered her education by attending the University of Baltimore graduating in 1977 with her Bachelor’s degree in Accounting. “Diane” as she was affectionately known, was a wife, mother, life-long companion, grandmother, sister, aunt, provider and friend. She meant so much to so many people. She was truly funny and out-spoken at times. A very diligent, generous, helpful, humble, kind, and a resourceful women of God who accepted Christ early in her life. In 2001, she became a member of Triumph Christian Church where she worked in many capacities. In 2011 she was appointed chairperson of the Trustee Board and remained in that position until her demise. She had a very special love for her pastor. She later began her employment at Sweetheart Cup Company, as well as Prudential Financial Insurance Company, Meals on Wheels, Aerotek, Johns Hopkins University, and other city agencies. Diane loved working in jobs that would improve the quality of life for others. Diane met and married Terence Waters. From that union Terence Jr. was born. She later married Errol Harris and from that union Eric was born. She later met and married William “Billy” L. Lewis. After retirement she took on her most rewarding full-time role as mom and grandmother, even becoming mom to her loving daughter-in-law Belinda who is the daughter that she never had. They were best friends who talked many times throughout the week. Diane loved her family dearly and would host gathering in her home. At family gatherings she came with a quiet smile on her face and would then find something funny at the affair to joke about and her jokes were always one of a kind. In 1998 she was initiated in Star of Bethlehem Chapter #11. She later joined Adah Chapter #5 and became the Worthy Matron, but serving as Grand Matron of Naomi Grand Chapter was her most cherished accomplishment. Her fraternal journey continued in Estelle Taylor court #2 Order of Amaranth (Post Royal Matron), Heroines of Jericho (Senior Matron), Lady Knights (Treasure), Daughters of Sphinx (Secretary), and Rose of the Seven Seals. At the time of her passing, she held the office of Supreme Grand Recording Secretary in the Supreme Grand Chapter. She was a Sister, Lady, Daughter and a Rose. She will truly be missed by her Fraternal Family. In the year 2004 she met the love of her life Cedric Burks who became her life-long companion until her death. They traveled together for many years to many places and spent time together as they built a loving friendship. She leaves to cherish her memory, her two loving sons Terence Waters Jr. and Eric Harris (Belinda), brother, Paul Pinkney Jr., and one sister Angela Cox. Her two loving grandchildren, Kayshawn Harris and Raiyne Tilman-Waters, a devoted companion, Cedric Burks and her Triumph Church Family, additional family/adopted Sisters of the Order of the Eastern Star and a host of other family members and friends.

The family of Diane M. Lewis created this Life Tributes page to make it easy to share your memories.

Send flowers to the Lewis family.