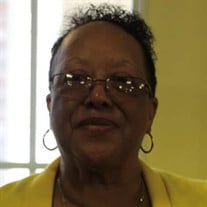 Therefore you too have grief, but I will see you again and your heart will rejoice and no one will take away your joy. John 16:22 God’s grace and mercy was strongly bestowed upon Diane Fowlkes in the evening of December 10, 2021 at 5:27 pm. She departed this life in the comfort of her home surrounded by her family and friends. Diane Elizabeth Fowlkes was born in Philadelphia to the late John D. Harrell and Lillian McMillan on November 21, 1945. She later moved to St. Paul, North Carolina where she attended the school district of St. Paul. She later moved back to Philadelphia, Pennsylvania where she finished out the rest of her education at Ben Franklin High School. Diane worked for many years in the early 70’s at an upholstery company. She attended Watterson School of Business and Technology where she received her certification for nursing in the early 80’s. In 1986, she moved back to Richmond, Virginia. There she met Frank Fowlkes, the love of her life in 1988. On May 30, 1992 they were married and began a life that both always cherish. Diane loved to shop! She would watch the QVC Shopping Network Channel and order so much stuff that she would have to hide it from her husband. You would of thought she was Chinese, because if you ever visited her home you were greeted by Chinese dolls, pictures and Buddha. Diane loved to dress especially when going to church with all sorts of handbags and shoes. She enjoyed eating seafood and soul food. She would often travel to New Jersey to visit her sister Jean and brother-in-law Jack and the rest of the family. Diane’s daughter, Kim who lived in Philadelphia which she was very proud of along with her grandchildren MarKeith and Londyn. She also was very fond of Roy whom she referred to as her son-in-law. She had a special relationship with her nephew, Ronald which she would call her son. Diane also spent a lot of time with her baby sister, Sandy who would drive her everywhere, especially Macy’s. She also enjoyed having long conversations with her daughter, Punkee. She always asked her to bring her all kinds of food when she came to visit. She loved when her nieces Sharon, Jackie, Sandra, Meji, Nikki and Trinia would call her on the phone. She loved all her nieces and they loved her as well. Diane had a special relationship with her two nephews, Brent and Tony who would make sure she had grocery and personal stuff. Diane attended Gospel Baptist Church which she became a member in the early 90’s and was baptized in 2008. She became a usher of the Elizabeth Turner Usher Board. Diane was diagnosed with cancer in May of 2021. With a strong support system the battle begun with her family. The family was there from the beginning of her journey, step-by-step from doctor appointment to hospital stays. She always had someone by her side, especially her daughter and sisters Sandy and Dorothy. She is preceded in death by her husband, Frank Fowlkes. Our beloved Diane leaves to cherish her two daughters, Kim Harrell and Chawan Jones; four grandchildren, MarKeith, Jim, Cam and Nya; one great-granddaughter, Londyn; five sisters, Dorothy, Sandy, Carolyn, Shirley, and Barbara Ann; five brothers, John, Alfonso, Charlie, David and one that preceded her in death, Theodore; one sister-in-law, Judy; one brother-in-law, Jack; godson, Jamar; a host of aunts, uncle, nieces, nephews and cousins; along with two dear friends, Mr. & Mrs. Ballard; and her children that she called her own, Sherry, Iris and John. Diane will be greatly missed by all. She was a wonderful wife, mother, grandmother, teacher and friend. She will be remembered by her gentle spirit, kind-hearted and glowing smile.

Therefore you too have grief, but I will see you again and your heart will rejoice and no one will take away your joy. John 16:22 God&#8217;s grace and mercy was strongly bestowed upon Diane Fowlkes in the evening of December 10, 2021 at 5:27... View Obituary & Service Information

The family of Diane Fowlkes created this Life Tributes page to make it easy to share your memories.

Therefore you too have grief, but I will see you again and your
heart...

Send flowers to the Fowlkes family.