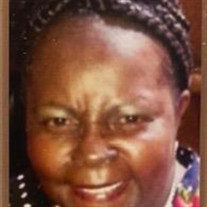 MS. DIANA FARRAR was born in Wilkes Barre, Pennsylvania on September 28, 1946 to Adolph Sr. and Evelyn (Hayes) Motley who both have preceded her in death. She was a coal miner’s daughter. The family moved to Baltimore, Maryland in 1952, and she attended the Baltimore City Public Schools graduating from Paul Laurence Dunbar High School in 1964. Diana travelled the world — Paris and Germany to name a few; and was a member of several organizations — Congress of Racial Equality (C.O.R.E.) and Eastern Star. She received her Associate’s degree in general studies in the late 1970s. She was also a breast cancer survivor for over ten years. She accepted Christ as her Lord and Savior and was baptized at an early age. Diana was once married to Eugene Farrar, and from that union they had two daughters, Hope and Sharon, whom she loved and adored always calling them her two girls. Diana had numerous jobs but the one job she loved the most was working at Johns Hopkins Hospital as a Cytopathology Tech II and becoming the manager of the lab. She served for forty years and three months before retiring in 2014. God had given her the gift of hospitality meaning she was that mother figure to everyone she came in contact with, always sharing her gift of cooking and laughter. She could be quite the jokester— dancing, singing and plenty of conversation; and she loved the Baltimore Ravens. She comforted those who were in need when needed. She was the go-to person to get a big hug and a good tasty hot meal. She was our Diva who loved to dress up and look sharp as a tack. Diana leaves to mourn: her two daughters, Stephanie (Hope) Farrar Brown and Sharon Denise Farrar-Feaster and longtime friend Naron (Teddy) Lawrence; her sister, Virginia (Motley) Fernandez who she loved and cherished deeply; two brothers, Adolph Motley Jr. and Nelson Lee Motley Sr.; two sistersin-law, Barbara and Marva; one son-in-law, Warren Brown and son-in-lawto-be, Marvin Battle; seven grandchildren, (Troy preceded her in death) Shanay, Rodney, Cardel, Bryan, Brandon, Brittany and Bryant; eight greatgrandchildren, Da’Shawn, Bryanna, Kamari, Chatia, Royal, Teon, Ameenah, Royal (boy); three nieces, Tracy, Apryl and Khalilah; three nephews, Nelson Jr. (Traci), Jose and Keith Farrar; a host of other relatives and friends

MS. DIANA FARRAR was born in Wilkes Barre, Pennsylvania on September 28, 1946 to Adolph Sr. and Evelyn (Hayes) Motley who both have preceded her in death. She was a coal miner&#8217;s daughter. The family moved to Baltimore, Maryland in 1952,... View Obituary & Service Information

The family of Diana Farrar created this Life Tributes page to make it easy to share your memories.

Send flowers to the Farrar family.