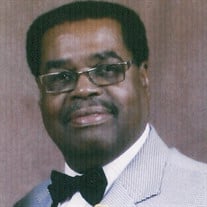 “And God shall wipe away all tears from their eyes; and there shall be no more death, neither sorrow, nor crying, neither shall there be any more pain: for the former things are passed away.” Revelations 21:4 Dennis Junious Roberts, son of the late Lillie V. Roberts and Dennis Brown of Charlotte County, Virginia, was born on November 3, 1940. Early in the morning on Sunday, November 21, 2021 his Heavenly Father called him to a home he had prepared for him. He was preceded in death by his two sisters, Clarice Sally, Eleanor Townsend and his brother, John Townsend. Dennis was educated in the Charlotte County Public Schools System. At an early age, he gave his life to Christ and later became a member of St. Mark Baptist Church in Maiden, Virginia where he attended regularly until his health began to fail him. He enjoyed singing in the St. Mark Male Chorus and had a love for dressing up in his fine clothing. You could always find him dressed in a new suit, shoes and a hat to match. His favorite pass time was dining at a nice restaurant. He worked for the City of Richmond Public School System as a mail carrier and retired in 2010 with thirty years of service. While employed for the City of Richmond, Dennis met and fell in love with his co-worker, elsie M. Harris. They were united in marriage on May 9, 1987. Dennis was a member of Capital City Lodge No. 102 Prince Hall Affiliated where he served as Tiler for several years. He was also a member of Richmond Chapter No. 7, Holy Royal Arch Masons and Richmond Consistory No. 22, Ancient & Accepted Scottish Rites of Free Masonry. He leaves to cherish his precious memories, a devoted wife of 34 years, Elsie M. Roberts, two daughters, Denise Meade (Kevin Sr.),Tina Jackson, three grandchildren, Charity Wilkins, Kevin Meade, Jr.,Roston Meade (Joakima), seven great-grandchildren, two stepsons, Maury P. Harris, Jr. (Carrie), Willie L. Harris (Alyse), four step-grandchildren, six step-great-grandchildren, one sister, Ardie Jones (Lewis) of Baltimore Maryland, two sisters-in-law, Eva Thomas, Diane Townsend, five nieces, five nephews, a host of cousins, relatives and friends.

&#8220;And God shall wipe away all tears from their eyes; and there shall be no more death, neither sorrow, nor crying, neither shall there be any more pain: for the former things are passed away.&#8221; Revelations 21:4 Dennis Junious Roberts,... View Obituary & Service Information

The family of Dennis Roberts created this Life Tributes page to make it easy to share your memories.

“And God shall wipe away all tears from their eyes; and there...

Send flowers to the Roberts family.