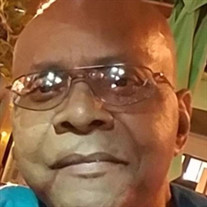 Dennis Eugene James, son of late Genenieve and Raymond James was born October 18th, 1949 in Baltimore, Maryland. Dennis “Coach D” as he was called was educated through Baltimore City Public School Systems. In 1973 he met, Betty Anne Wiggins, they formed a union with one daughter, Shemie D. James. Throughout his life, Dennis “Coach D” pursued boxing, a sport he fell in love with and he loved teaching it as well. In the 80s, “Coach D” traveled to California and worked alongside Jack Mosley where he opened and operated the Jack & Shane Mosley Boxing Gym training amateur fighters and coaching pro-fighters before their fight. When Dennis “Coach D” returned to Baltimore he reunited with a past friend Marvin McDowell who’s the Founder of Umar Boxing Gym. The two became best friends. “Coach D” has been a part of Umar boxing gym since 2002. This turned out to be a team built on loyalty. Coach opened that gym and closed it, changing lives every day, building self-esteem every day. He was a positive role model. From California to Baltimore we are forever grateful, forever sadden and forever thankful. Dennis “Coach D” is preceded in death by his mother, Genenieve James; father, Raymond James; sister, Glenda James; and brother, Edwin James. He leaves to preserve his memory: one daughter, Shemie D. James; one granddaughter, Amaiya Mbatu; four aunts, Mary Quinn, Rosetta Brown, Mae Beads, and Eileen McCloud (Larry); one uncle, William Cole; two best friends, Marvin McDowell and Denise Preddy; along with a host of relatives and friends

The family of Dennis Eugene James created this Life Tributes page to make it easy to share your memories.

Send flowers to the James family.