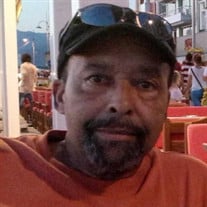 Delroy was born on October 23, 1942 in Baltimore, MD and was the second child of Bradie and Hilda Matthews, of Glen Burnie, MD. His early education was at the Furnace Branch Elementary School located in Glen Burnie, MD and he completed his junior and senior high school education at Wiley H. Bates in Annapolis, Md. He also ran track while in high school and became an avid marathon runner later in life and ran many marathon events, including qualifying and running in the Boston Marathon, twice. Delroy met the love of his life, Phyllis (Madinah) Simmons and enjoyed 58 years of marriage. Of this union they had four children. He truly loved his family and they loved him back. The family later became members of the Islamic Religion. Delroy was employed at various jobs and after which he was hired by General Motors on Broening Highway, located in Dundalk, MD where he retired after 30 years. After retiring from GM, he went into the trucking business for himself (Saleem and Sons Trucking Company) and became the owner operator of his own rig and later purchased a Harley Davidson motor cycle. He enjoyed being a member of the Buffalo Soldiers Motor Cycle Club, where he traveled to many motorcycle round ups events in other States. Delroy had a kind heart and was always willing to help others along the road of life, including helping his nephew Ricardo to obtain his CDL license. He loved driving out of state to family reunions and especially to Hawkinsville, Georgia to visit his daughter and family. On his last trip to Hawkinsville he drove 14 hours as he had done over the years with his wife, sister, and sometimes other family members that chose to ride along. Delroy is survived by his wife, Madinah Saleem; children Bevern Saleem, Steven Saleem, Ameenah Johnson (Julius) and Khalil Saleem; One sister, Janice Jones, and brother, Chesley Matthews (Diane); ten grandchildren; two great-grandchildren; and a host of other family members and friends.

Delroy was born on October 23, 1942 in Baltimore, MD and was the second child of Bradie and Hilda Matthews, of Glen Burnie, MD. His early education was at the Furnace Branch Elementary School located in Glen Burnie, MD and he completed his... View Obituary & Service Information

The family of Delroy Saleem created this Life Tributes page to make it easy to share your memories.

Send flowers to the Saleem family.