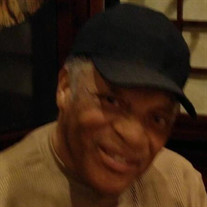 DELIA (DEAN) BOYD was born on April 29, 1954, in Bishopville, SC to Essie Mae Moses (nee Jenkins). After some time, Delia was adopted by Ella Boyd (nee Laboo) and became affectionately known as “Dean”. Fortunately, he was able to have been cared for and loved by both families. Dean had many, many siblings. Biologically, he had 1 brother: Isaac (Janie) Jackson of Bishopville, SC; and 5 sisters: Annie Pearl Jackson of Sumter, NC; Rebecca Jackson of Newport News, VA; Mary Ann Muldrow of Hartsville, SC; Yvonne Moses of Columbia, SC; and Elaine Dukes of Beaver Falls, PA. Through his adoption, Dean acquired 10 more siblings all of whom were of Baltimore, MD. There were 6 sisters: Ida Mae Boyd; Eloise Boyd, Jannie Boyd, Julia Mae Boyd, Flossie Boyd, and Yvonne (Cotton) Boyd; and 4 brothers: Reverend David Boyd, Jack Boyd, James Boyd, and Harmon Boyd. Dean grew up in church and loved to sing. He and other family members formed a singing group, the Boyd Family, that performed in many churches in the South Carolina and Baltimore areas. Dean graduated from Bishopville High School and was an avid sports fan throughout his life. He especially loved basketball and football, both of which he played at varying periods throughout his lifetime. Beginning his career at Baltimore Gas & Electric Company as a construction worker, Dean later chose to drive tractor trailers for several companies. He may have begun his love for driving when he once borrowed (without permission) his brother’s car to take his nieces and nephews to the amusement park. His brother never discovered what he had done so we are certain Dean took that as a sign from God (smile)! Dean had a diverse appetite for many different styles of food. He loved venison, rabbit, and raccoon. He also loved Maryland style seafood and often craved steamed blue crabs, crab cakes, lobster, shrimp, oysters and many different varieties of fish, especially catfish. Dean leaves many to cherish his memory and celebrate his life including: his wife, Gwendolyn Yvette Boyd (nee Lindsey); some of his biological and adopted siblings; a host of nieces and nephews; numerous great nieces and nephews; four sisters-in-law, Jeanetta E. Hinton (nee Lindsey), Maria A. Lindsey Ahmad, Dulcinea R. Lindsey, and Virginia Lindsey (nee Randall); and two brothers-in-law, Claude R. Lindsey, and Robert A. Wallace; and other extended family and friends

DELIA (DEAN) BOYD was born on April 29, 1954, in Bishopville, SC to Essie Mae Moses (nee Jenkins). After some time, Delia was adopted by Ella Boyd (nee Laboo) and became affectionately known as &#8220;Dean&#8221;. Fortunately, he was able to... View Obituary & Service Information

The family of Delia "Dean" Boyd created this Life Tributes page to make it easy to share your memories.

Send flowers to the Boyd family.