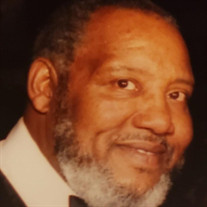 Our Beloved DELATOUR CHAUNCEY SPRIGGS was born on September 9, 1943 in Baltimore, Maryland. He was one of four children born to the late Jefferson Alexander Delatour Chauncey Spriggs and Doris Mae William Spriggs. He received his angelic wings on May 5, 2021. Delatour was educated in the Baltimore City Public School System. He attended Paul Laurence Dunbar High School, where he excelled in wrestling and football. He was a graduate of the Dunbar Class of 1962. Upon graduation, he obtained employment at Baltimore City Hospital as a Chef. After a few years he changed careers and was employed by Union Trust Bank as a driver. Del’s career in banking spanned from Union Trust to Wells Fargo from which he retired as a project manager. After retirement he chose to work for Taylor Made Inc. as a shuttle driver, where he would shuttle veterans to various appointments and he thoroughly enjoyed his time there. He was a lifetime member of St. Philip’s Lutheran Church. In his youth he attended church and Sunday school. He faithfully served on the church council where he chaired the property committee. In 1970, he married Jacqueline L. Williams. They were united in a loving marriage for 50 years and during this union, they raised three wonderful children. Billy, as he was fondly known, loved to cook his fan favorite, fried chicken. He loved to spend time with his grandchildren, sisters, family and friends. He enjoyed watching the Ravens and Orioles games. Del was a founding member of the Four+Four Social Club. Del leaves to cherish his memory: his loving wife, Jacqueline; two sons, Andre Spriggs, Sr. and Trent Spriggs; daughter, Nicole Spriggs Woolford; grandchildren, Andre Spriggs, Jr., Terrance Spriggs, Sr., Kayla Woolford, Jordan Woolford; great-grandchildren, Madison Spriggs, Serenity Spriggs, Terrance Spriggs, Jr., Payton Spriggs, Logan Spriggs, Terraney Spriggs; two sisters, Josephine Morton and Carolyn Simms. He also leaves: three brothers-in-law, James Harry Williams, Richard Micheal Williams, Keith R. Small of Woodbridge, VA; four sisters-in-law, Gloria Reed Brown, Danita R. Blount, Evelyn A. Small of Woodbridge, VA, Lisa Williams, Chevonn Williams; and a host of other relatives and friends. His brother, Barry Baneo Spriggs, preceded him in death. Del will be greatly missed and lovingly remembered.

Our Beloved DELATOUR CHAUNCEY SPRIGGS was born on September 9, 1943 in Baltimore, Maryland. He was one of four children born to the late Jefferson Alexander Delatour Chauncey Spriggs and Doris Mae William Spriggs. He received his angelic wings... View Obituary & Service Information

The family of Delatour C. Spriggs created this Life Tributes page to make it easy to share your memories.

Our Beloved DELATOUR CHAUNCEY SPRIGGS was born on September 9,...

Send flowers to the Spriggs family.