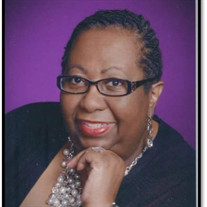 DEBORAH (DEBBIE) VIOLA WILLIAMS was born on November 23, 1954 to the late James Rollon and Cora Viola (Newby) Williams in Baltimore, Maryland. She was called to rest on Tuesday morning, September 14, 2021. Debbie, the youngest of five children, was preceded in death by two older siblings, Dolores Williams McKoy and James E. Williams. Debbie was raised in the church and accepted Jesus Christ as her Lord and Savior at an early age. She loved to imitate the voices of famous singers and as an active member of Wayland Baptist Church, Debbie enjoyed singing with the Chancel Ensemble, the Womens’ Chorus, the Mass Choir, and recently the Praise and Worship Team. Since she was blessed with a beautiful soprano voice, Debbie was often called upon to perform solos during church service and other special occasions. Jerrod Hinton, a fellow church member, frequently joined her in the performance of duets. She also performed at other local churches. As a child, Debbie attended Baltimore City Public Schools, and graduated from Towson University in 1977. During the early 1980s, she moved to Dallas, Texas. However, after a few years, Debbie decided to return home to be near her aging parents. Many of her working years were spent at Johns Hopkins Bloomberg School of Public Health and Krieger School of Arts and Sciences. She retired from Hopkins in 2019 after over 20 years of service. Since Debbie worked very diligently, she was considered an asset to her colleagues. She was a member of the Alpha Alpha Sigma Alumnae Chapter of Sigma Gamma Rho Sorority Incorporated. Debbie was also a member of the Center for Remarkable Women, an organization that aspired to transform women of all ages, backgrounds, and circumstances with purpose, confidence, and power. Debbie functioned as one of the program’s facilitators for that organization She loved to go on cruises and looked forward to “sister weekends” to attend craft shows, concerts, and festivals. In her spare time, she was an avid reader who enjoyed making quilts, embroidering, designing and making jewelry, crocheting, making clothes, and painting. Elegant Designs by Deb, established in August 2016, was a boutique that featured customized embroidery and special fashions all hand-sewn by Debbie. She offered embroidered infant blankets and young children specialty bedding, as well as wall hangings. Debbie belonged to the Maryland Sewing Guild and attended retreats as a way of enhancing her sewing skills. With the start of the Coronavirus Pandemic, she immersed herself in making and mailing out multi-layered masks to family, friends, and to all who requested them. She is survived by: sisters, Brenda McKoy and Joan Williams; brother-in-law, Robert McKoy; aunt, Delma White; niece, Karen McKoy Bracy (Rodney); niece, Kea McKoy; great-nephews, Aaron Bracy and Adam Bracy; as well as a host of cousins and friends

DEBORAH (DEBBIE) VIOLA WILLIAMS was born on November 23, 1954 to the late James Rollon and Cora Viola (Newby) Williams in Baltimore, Maryland. She was called to rest on Tuesday morning, September 14, 2021. Debbie, the youngest of five children,... View Obituary & Service Information

The family of Deborah V. Williams created this Life Tributes page to make it easy to share your memories.