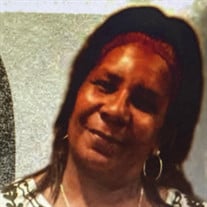 Our beloved Deborah (Debbie) Lynn Conway was born on February 2nd, 1961 Margaret Conway and Bishop John O. Coates in Baltimore, MD. She took her final breath surrounded by loved ones on Thursday, March 10, 2022 Debbie's early years were filled with a vigorous love for learning and a knack for catching on quickly as a of being responsible for helping her younger brothers along at a young age. She was smart and witty and and was a force to be reckoned with. Debbie attended Baltimore City Community College. While many were focused on their career aspirations, Debbie's children were the focal point of her life. She was the proud parent of 8 girls 4 boys. Her daughter Sloan died when she was 12 years-old , which became a source of heartache for Debbie. Through her struggles. Debbie ingratiated herself with the love of family and the love of all things spiritual. Having Bishop for a father, Debbie, for a time was constant presence at her father's church, helping him keep the church in order. As the children became older, Debbie involved herself with training programs that allowed her to become employed with Baltimore City and Patapsco Water treatment plant where she was last employed. Debbie loved cook and care for her family. She enjoyed listening to music and handing out losses to most who challenged her in a game of cards, She was a warrior throughout life and was so much more the struggles. She was a fierce woman who was firm in her beliefs, defended those she loved, and was steadfast in her pursuit to better herself and her children. Debbi was preceded in death by her parents, Margaret (Margie) Conway and Bishop John O. Coates, Sr. her daughter Sloan Conway and her brother Daryl Conway. Debbie is survived by her husband Larry Heath, eleven of her children, Quintonya and Edreesa Logan, Arthur and Miriam Conway, Shayna Rosette Kelly Hough-Hines, Maranda Conway-Hines Karin Elmore Hines, Kimari Anthony Alston, Neavaeh Logan, Cassidy Rosette, Kamari Worsley, Camryn Rosette, and Robert Pressberry III , son-in-law Chris Rosette, stepdaughters Deborah Carr and Laura McCoy, her brothers, John Coates, Jr., Kwayera (Reggie) Dakari, Dr. Clifton L. Coates, David Conway, Dan Conway, and Dennis Conway as well as many aunts, uncles, nieces, nephews, cousins, and friends. We take comfort in knowing that Debbie is now at peace surrounded by light. She will be dearly missed and always remembered.

The family of Deborah L. Conway created this Life Tributes page to make it easy to share your memories.

Our beloved Deborah (Debbie) Lynn Conway was born on February...

Send flowers to the Conway family.