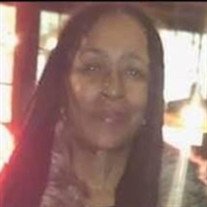 Debbie Denise Pope Hyman, 61, of Rosedale, Maryland, passed away on Tuesday evening, November 23, 2021. She was born on July 21, 1960, in Baltimore, Maryland, to Martha Mae Powell of Halifax, North Carolina and the late Norman Samuel Pope Jr. of Halifax, North Carolina. Debbie was raised in Neptune, New Jersey, where she attended public school until her family moved to Maryland during her senior year of high school. She graduated from Overlea High School in Baltimore, Maryland in 1978. Debbie received a Bachelor of Arts degree in 2003 and a Master of Arts degree in 2006 in education from Notre Dame of Maryland University. She had a passion for working in special education with children who had special needs, which she did nearly 30 years. Debbie was also a published author. In 2012, she wrote a book titled “I’m On My Way”, which is an inspiration religious poetry book to help Christians learn more about God and his Kingdom. Debbie was loved by many. Her physical presence will be missed deeply. Her eyes had the most mesmerizing glisten to them. Debbie loved music, dancing, and being near those she loved. She was a daughter, sister, mother, aunt, and friend to all who knew her. We will remember the sound of her laughter. We will remember her for being uplifting. We will remember her long beautiful locks. We will remember the blessing she was to so many people. Debbie is preceded in death by her father, Norman Samuel Pope Jr., and her two sisters, Angela Edwards and Pamela Pope. She is survived by her mother, Martha Powell, by her three brothers, Gary Murray, Orlando Pope, Norman Pope, and her sister Sandy Pope. In addition, Debbie is survived by her children, Jaron Whitehurst, Jerrel Hill, Carla Hyman and bonus children Brandi Hyman, Toni Hyman, and Jasmine Hyman. Debbie is survived by 16 grandchildren, Damien Kirkland, Kasi Toatley, Kasiem Toatley, Jamal Whitehurst, Jazie Perry, Javon Whitehurst, Xavier Whitehurst, Angel Hill, J’avril Smith, Kaz Waller, Arielle Jefferson, Brinton Teele, Marilynn Monroe, Austin Holloman, Brock Hyman-Gardner and Calani Whiteher. She is also survived by 2 great-grandchildren Isabella Brown and Elizabeth Brown. She was sister-in-law to LaDonya Murray and Danielle Pope. Debbie was also an aunt to many nieces and nephews and had a host of cousins and many dear lifelong friends. We have great comfort in knowing that Debbie is now in a place of extreme joy where death will be no more and mourning and crying and pain will be no more. If there was anything that she could communicate to any of us, perhaps she would say. Don’t weep for me for I’ve made it home. Through heaven’s gates there I may roam. Wipe your tears and dry your eyes I’m in a better place with heaven as my prize. Don’t weep for me. No tears and no sorrow. Live life for Jesus. He alone promises tomorrow.

The family of Debbie Denise Hyman created this Life Tributes page to make it easy to share your memories.

Send flowers to the Hyman family.