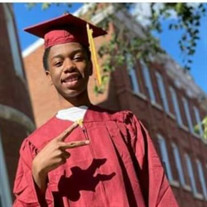 Dayquan William Woodard, son of Nazarene and Anthony Woodard, was born on April 29, 2002 in Baltimore, MD. He was ushered into heaven by his grandparents, Martha and William Edwards-El and Pauline Wilson on March 20, 2021. Quan, as he was affectionately called by his family, had recently graduated from Dunbar High School and was accepted into Morgan State University to pursue a degree in Software Engineering. As a child, he developed a love for electronics and always wanted to create his very own video game. He was a great student. He took pride in his grades and would always strive to be better. He was a consistent honor roll student. Quan was an active member of the S.A.F.E. Center from the age of 14. At the center, he was introduced to lots of activities such as fishing, horseback riding, woodshop and was even certified in CPR. It was there that he developed a passion for STEM projects, which led him to create his very own solar powered fan. They were instrumental in assisting him with his pursuit of a college degree. Quan was very independent and he was a go-getter! He was most recently employed at the Downtown Sailing Center. He loved to play video games while cracking jokes with his friends, Kam and Stephon. Even though he had a quiet personality, he was still best known for his sarcasm! He also didn’t play about his money. He loved to save and he made sure that he always kept money. Quan was the second oldest child but he was a great big brother to all of his siblings. He was the most responsible and he was always there for them. He loved each and every one of his brothers and sister, but he had a special relationship with his baby brother, Boogie. Dayquan was the first of his parent’s children to graduate and they were so proud of him! His mother could count on him to do anything that she needed him to do. He enjoyed spending time with his father watching football, sometimes schooling his father on the game. His parents were so happy to know that he was about to start his new job at Amazon! Although he was only here for a short time, his life and presence will forever be remembered. Dayquan leaves to cherish his memories: his parents, Nazarene and Anthony Sr.; his brothers, Anthony Jr., Eddie, Antwone and Jermiah; his sister, Emia; his grandfather, Mark; his aunts, Michelle, Sheila (Timothy), Maria, Melissa and Meica; his uncles, Maurice (Asia), Jamar(Shirneka) and Dedarius (Tyeisha); his great-aunt, Sharon (James) and Sharon; great uncles, Randolph and Howard (Aurelia); his godmother, Ramona, godsister, Keisha and godbrother, Joseph, and host of cousins and friends

Dayquan William Woodard, son of Nazarene and Anthony Woodard, was born on April 29, 2002 in Baltimore, MD. He was ushered into heaven by his grandparents, Martha and William Edwards-El and Pauline Wilson on March 20, 2021. Quan, as he was... View Obituary & Service Information

The family of Dayquan Woodard created this Life Tributes page to make it easy to share your memories.

Send flowers to the Woodard family.