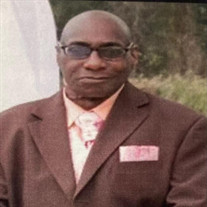 David Raymond Shaw was born on August 27, 1966, in Newark, NJ to Raymond F. Spruell Sr. and Carolyn V. Shaw. David grew up in Newark, NJ and graduated from Newark Vocational Technical School in 1984, where he studied Automotive Technology. David found success in retail where he had multiple opportunities to interact with the public. A highlight of his career was that he was selected to be a presenter at the NY International Auto Show at the Jacot Javits Center for Nissan USA. He had a friendly disposition and could strike up a conversation with anyone. David loved music. House music, in particular, was his passion. In his younger years, he spent a lot of time D'Jing and dancing with his brother, Ray. Even recently, he would travel from Maryland to New Jersey to spend the summer attending the numerous house music festivals. "Dave danced to the beat of his own music", and when it comes to Dave, the phrase "gotta have house music" has never been truer. David also loved his family. He enjoyed spending time with numerous family and friends, especially his daughter. Chaquawna Snowden, who was born December 1989. As a child, David was associated with Jehovah's Witnesses and enjoyed attending meetings with his mother. Carolyn and brother, Brian. He recently reignited his passion for learning about the Bible and resumed his studies, attending weekly meetings via Zoom. Davis's sister, Lisa, poignantly summarized the energy he displayed in this way: "Dave often sat in silence. Often it was by choice, with a simple wish to be acknowledged and loved. And in return, he poured an unbelievable amount of commitment and dedication by standing in the shadow as out "under armor", the wind beneath our wings, so that we stood front and center." David was loved by many and will be sorely missed. David was preceded in death by his mother, Carolyn V. Shaw, father, Raymond F. Spruell, Sr., and sister, Monique M. Spruell. Left to mourn his passing are siblings, Lisa L. Knowles, Raymond F. Spruell, Jr., Brian R. Shaw, Alfie O. King, Shawnra R. Dillard, Haid H. Spruell and Rasheedah A. Jones; daughter, Chaquawna Tyvoria Snowden and grandchildren. Ya'Sir Giles an Taheem Giles. He also leaves a special friend, Loinette Covington, a daughter by love, Davanye I. Bowser, and a host a family and friends.

The family of David Shaw created this Life Tributes page to make it easy to share your memories.

Send flowers to the Shaw family.