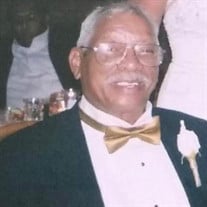 DAVID THOMAS HILLIARD JR. was born on September 18, 1938 in Tarboro, North Carolina to the late David and Geneva Hilliard. He peacefully transitioned on Saturday, October 23, 2021 at Sinai Hospital in Baltimore, MD. David accepted the Lord as his Savior at an early age. David, affectionately known as Dave or "Buck, grew up in Tarboro, North Carolina. While growing up in Tarboro, he was very adventurous and at times mischievous. He enjoyed climbing our of the window of Big Mama's house, playing in the Tar River and playing with his childhood friends. It was there in Tarboro, where he was educated in the Edgecombe County Public School system. Buck worked at The Hart Cotton Mill in Tarboro, NC until he started working with his father as a painter. Buck was named after his father who taught him the trade of painting which became his career. He worked with his father and would often travel to Baltimore, Maryland to do painting jobs. In 1968, he moved to Baltimore with his wife and children and eventually took over the painting business years later after the passing of his father. He was able to see the fruits of his labor by watching the business expand to Hilliard Developers with the help of his son and grandsons. Buck enjoyed playing the lottery, watching Westerns, hunting, fishing, listening to "oldie but goodies" that he would tap his feet to, talking trash, spending time with his family, sitting on his porch in his favorite chair and "doing what he liked to do best". (If you really knew Buck, then you would know what this means -:) He has also known for making the best North Carolina Bar-B-Que. Whether it was a joke, a funny phrase or a good old swearing, he was genuine. He was not a complicated man and was not pretentious. As the saying goes, "What you see is what you get" and he was as real as they come. During his early adulthood, he married the love of his life, Dorothy Mae Bridgers on August 3, 1959. Dot and Dave grew up together in Tarboro. They played together and attended Sunday school at St. Paul A.M.E. Zion Church. Dot and Dave were married for 62 years and he was a very devoted husband. Of their union, they had five children. They loved each other dearly and often would share their funny "Tarboro" stories. He was very devoted to his children. When they were young, he would pack up his station wagon and take them to the beach, fishing or travel to Tarboro. He also had a special bond with his grandchildren, nieces and cousins. He enjoyed them, just as much as they enjoyed him. In fact, he gave some of his grandchildren and other family members special names...just to name a few, he called Little Darryl BO-JO, Earl Squirrely, Shenika Fat-Ma, Kenneth Fat'Daddy, Kendra Bumpdy Dump and Deborah & Daphne Debbie-Dap. In addition, e had a father/son relationship with his nephew, Kelvin/KK of whom he called K-Boy! K-Boy! and Buck would always chant their all-time favorite saying "hii-ooowwwllllll"! Buck also had a sister/brother relationship with his cousin Myrna Deloatch. They were close. They were very close. A lot of his childhood memories involved her; including when she use to do his homework. He also had a special bond with his niece, Senithea Adams of whom she looked up to as a father. He gave her away at her wedding. In addition to his parents, Dave was preceded in death by his siblings, Darryl Hilliard, Ricardo Hilliard, Carolyn Belcher and Cynthia Belcher, and his sons, Russell Wiggins and Quintin Hilliard. He leaves to cherish his fondest memories; his wife, Dorothy Hilliard; six children, Diane Wagner (Chris), Norman Ruffin, Terrensa Hines, Darryl Hilliard (LaVerne), Carol Hilliard, and Angela Hilliard; eleven grandchildren, Darryl Jr. Hilliard, Shenika Hilliard, David Hilliard III, Sharde' Hilliard, Darian Hilliard, Zaneta Ruffin, Julian Hilliard, Earl Edwards IV, Myles Hilliard (Carly), Ryan Richardson and Jason Russin,; eleven great-grandchildren, Deajah, Kennedy, Jay'son, Darian Jr, Zanauri, Kyloee, Karden, Collin, Damari, Ezra, Nathaniel; ten siblings, Emogene Lawrence, Delphine Jones, Jeannete Nesmith (Maceo), Marian Daniel Olin, Ana MIller, Senora Hilliard Spotswood, Ellis Ward Hilliard (Cindy), Madeline Belcher, Melinda Belcher and Louis Belcher (Jean), and host of cousins, nieces, nephews and friends. Buck had a very close and special relationship with his brother-in-law, James (Bud) Bridgers and his sister-in-law, Ruth Bridgers, his nephew Kelvin Bridgers, nephew Kenneth Farmer, great-niece Kendra Bonaparte and great-nephew Melvin Grant. Dave also had a close relationship with his two neighbors Joe and Darnell.

The family of David T. Hilliard, Jr created this Life Tributes page to make it easy to share your memories.

Send flowers to the Hilliard, family.