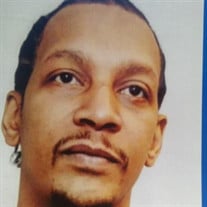 DAVID TIMOTHY BARNES, SR., son of the late Joseph Milton Barnes, Sr. and Ruth Barnes was born December 7, 1969 in Baltimore, Maryland. David, being the second oldest son to Joseph and Ruth, received his formal education in the Baltimore City Public Schools, where he attended Edmondson/Westside High School. During his early years, David gained a love for collecting comic books and shooting pool, where he made many friends. David Barnes was a dedicated employee of The Johns Hopkins Hospital Bayview, where he worked for thirty years. His coworkers and friends loved his witty and sarcastic demeanor. While at Johns Hopkins Bayview, a young lady, Katrina Davis, caught David's attention. During the early stages of their relationship, David couldn't remember Katrina's name, so he gave her the nickname "Puddin." The nickname must've worked because on July 26, 2010, Davis and Katrina were married. David loved his family, especially his sons, David Jr. and Samuel. David had a special bond with his siblings, Joseph Jr. (who preceded him in death), and the twins Rachel and Nathaniel. David was often found spending precious time with his mother, Ruth and enjoyed talking to his Aunt Bertha about the Lord. David will be remembered for his warm smile and kind heart. David leaves to cherish his memory: his devoted wife, Katrina Davis Barnes; two sons, David Barnes, Jr. and Samuel Eggleston; two siblings, Rachel Barnes and Nathaniel Barnes; four aunts, Bertha McCleary, Veola Bannis, Betty Thames and Stella Williams; one uncle, Leon Thames; nineteen nieces and nephews, and a host of other relatives and friends.

The family of David Barnes created this Life Tributes page to make it easy to share your memories.

Send flowers to the Barnes family.