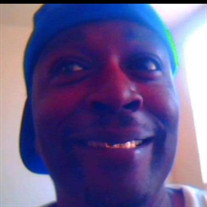 DARRYL L. ALSTON, SR. was born on July 24, 1964, the son of Rev. Dr. Susan Alston Spears and the late Joseph H. Alston Sr. in Baltimore, MD. Sorrowfully, Darryl died of a ruptured ulcer. His crossing over was unexpected for his family but his cry for help was heard by God. He is now free and with the LORD. Darryl married the love of his life and childhood sweetheart, Bridgette Eaton, she preceded him in death. From this union of love six children were born, Myron, Darryl Jr., Deontae, Courtney, Lela, and Shamera. Darryl received his education from Baltimore City public schools and graduated from Walbrook High School. Darryl was gainfully employed at Crab Quarters as a chef. He focused on being the best chef possible. He desired to be an entrepreneur and partnered with his uncle Eric in a landscaping home improvements business. He later entered a joint business with his best friend, Gregory Whitehead. They worked on landscaping and snow removal projects. Darryl had many positive qualities. He was kindhearted, respectful, and a care giver. He cared for his uncle Vincent, like a private duty nurse. Darryl treated everyone like family. Uncle Bee Bee (Eric) became Darryl’s surrogate father, after his father crossed over to be with the LORD. Bee Bee (Eric) stated, “Darryl would give you the shirt off his back if you needed it.” Darryl loved football, he was an avid Ravens fan and baseball fan. He also loved music and he received many awards for music while in high school. Darryl was saved at an early age and was baptized by the late Rev. Dr. William W. Payne at The City Temple of Baltimore (Baptist) where The Rev. Dr. Grady A. Yeargin Jr. serves as Pastor. He attended Sunday school and was a member of the Junior Missionary Ministry. Darryl later re-married and attended the Rock Church with his former wife Tammie Hutcherson and his stepdaughter Andrea. His brother Joseph Alston, Jr. preceded him in death. Darryl leaves to treasure and cherish his memory: his loving mother, Rev. Dr. Susan A. Spears; six children, Myron (Shay), Darryl Jr. (Nekeia), Deontae (Kabrina), Courtney, Lela (William), and Shamera; six grandchildren, Jonathan, DeArria, DeMira, Nayliah, Alan and Skylar; two sisters, Renee Koromah (Melvin), and Sharee Love (Alvin deceased); favorite uncle, Eric Alston; childhood friend and business partner, Gregory Whitehead; former wife, Tammie; stepdaughter, Andrea; host of aunts, uncles, cousins, other relatives, and friends.

DARRYL L. ALSTON, SR. was born on July 24, 1964, the son of Rev. Dr. Susan Alston Spears and the late Joseph H. Alston Sr. in Baltimore, MD. Sorrowfully, Darryl died of a ruptured ulcer. His crossing over was unexpected for his family... View Obituary & Service Information

The family of Darryl Alston created this Life Tributes page to make it easy to share your memories.

Send flowers to the Alston family.