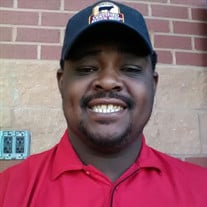 Darron Jamal Hakim Fennell was born on October 21, 1992 to Ronnie Johnson, and Zakia Fennell (both deceased), in Philadelphia, PA. Darron who was affectionately know as "Big" or "BG", graduated from the Philadelphia Public School System. Darron had a passion for cooking, so much so he attended Star Career Academy. He graduated with a diploma in Commercial Cooking on October 8, 2015. This is where he learned to bake, and decorate pastries. Darron enjoyed watching his favorite football team, The Philadelphia Eagles. In his spare time, he loved to watch Tom & Jerry, Two and a Half Men, and Big Bang Theory. Darron was always on Smedley Street with his :Bonus Granny", Barbara, and God-sister, Kayla. He would sit, talk, eat, run the grill in the summer for block parties, and assist with jobs she could not handle. He would also play with Kayla, and constantly talk to her about boys. In 2016, Darron moved to Baltimore, MD with his Aunt Angela . While there, he was able to enjoy playing video games with his little cousin, Sam. Darron was part time employee with Amazon, and just recently obtained his Driver's Permit. He was excited about getting his Driver's License, so he could get his CDL to drive trucks. He was preceeded in death by his Mother, Zakia Fennell, Father, Ronnie Johnson, Brother, Dominic Fennell, and Grandmother, Louella Fennell. He leaves to cherish his memory, Aunt, Angela King, Favorite Cousin Kenneithia (Neek) King, Antoine King, Samantha Avant, Josiah Avant, Samuel King-Briscoe, Niece, Chanel Fennell, Bonus Granny, Barbara Savior, Godmother, Nicole J. Savior, God-sisters, Angelica Murphy, Kayla Andrade, and a host of cousins

Darron Jamal Hakim Fennell was born on October 21, 1992 to Ronnie Johnson, and Zakia Fennell (both deceased), in Philadelphia, PA. Darron who was affectionately know as "Big" or "BG", graduated from the Philadelphia Public School System. Darron... View Obituary & Service Information

The family of Darron Jamal Hakim Fennell created this Life Tributes page to make it easy to share your memories.

Send flowers to the Fennell family.