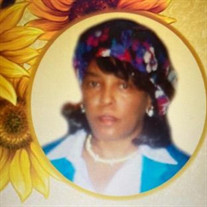 CYNTHIA DIANNE SMITH was born January 3, 1954 in Baltimore, Maryland. She was called home to be with her Lord and Savior Jesus Christ on September 15, 2021. Cynthia was the youngest of seven children born to the late Richard A. Sr. and Marjorie B. Smith. Cynthia, was affectionately known by many nick names, Tiny Baby, Nelly and Natalie. She was educated in the Baltimore City Public Schools. She worked at Bethlehem Steel as a Cashier, and other temporary jobs. Cynthia was a dedicated mother to her boys, Tyon and Eric, and she loved her whole family, always planning cook-outs and dinners, and everyone enjoyed her sweet potato pies. In November 1979, Cynthia married Walter “Deno” Myers, Jr., and of this union, two children were born, Tyon and Eric. She was so proud of them, and through their years together she imparted her wisdom unto them as a mother. She loved the Lord. Cynthia’s kindness, humor and concern for others were just a few of her endearing characteristics. She gave off a shy persona, but to know her, she was direct and to the point. Cynthia was the shining star of the family keeping her brothers in stitches laughing, but also keeping them in line. She didn’t shy away from helping someone, and she enjoyed her puppy (Snowball) her pride and joy. Cynthia joined Milton Avenue U.M.C. in October 1979 under Rev. Lewis I. Keene, then her membership transferred to Christ U.M.C. in 1999, where Pastor Twanda Prioleau is the current Minister. She supported Ministries of the church and loved working with the children in her neighborhood. Her favorite Scripture was the 23rd Psalm. Cynthia was preceded in death by three brothers, Larry D. Smith Sr., Charles W. Smith, and Richard A. Smith, Jr. and sister-in-law, Gwendolyn Smith. Cynthia leaves to cherish her memory: her sons, Tyon Myers and Eric Myers; grandchildren, DayShawn, Tyona, Taylor and Nevaeh; brother, Raymond Smith; two sisters, Shirley Tiller and Gloria (James) Savage; a host of nieces, nephews, cousins, other relatives and friends.

CYNTHIA DIANNE SMITH was born January 3, 1954 in Baltimore, Maryland. She was called home to be with her Lord and Savior Jesus Christ on September 15, 2021. Cynthia was the youngest of seven children born to the late Richard A. Sr. and Marjorie... View Obituary & Service Information

The family of Cynthia D. Myers created this Life Tributes page to make it easy to share your memories.

Send flowers to the Myers family.