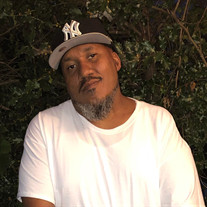 Craig Lamont Watkins was born, May 11, 1971. To the late Hazel A. Watkins and Robert L. Watkins, Sr, who proceeded him in death. Craig was the youngest of 5 siblings. He departed this life after a lengthy illness. Craig received his education in the Baltimore City Public School System, where he graduated from Edmondson High School. Craig was a hardworking young man. He worked most of his life and enjoyed it. He was a long-time employee for Walmart and before becoming ill he worked for Amazon. He also ran his own family business "Party 54 U Rentals." One thing about Craig he was always up for making a $$$. Craig was such a cheerful person who enjoyed life. He could always put a smile on your face with his joking ways. He was such a family man who enjoyed spending time with family and friends. Craig fathered 2 sons who he loved dearly. Craig fell in love with Tennille (Cookie) Take, when they became neighbors. They were together 20+ years, from this loving relationship 2 children were born. Craig and Cookie decided to get married on June 27, 2020 and seal their love. Craig leaves to mourn his wife Tennille (Cookie) Watkins; Sons Jarrett, Jarel and Tristen; daughter and bestie Carmille Watkins; Sisters Barbara Ann Watkins, who proceeded him in death, Rochelle Pugh, and Leslie Watkins; brother Robert (Pete) Watkins; and special cousin Shontel Leach and her family. Nieces Keaira Jackson, Kristine Clark, Jaylnn Watkins; nephews Johnny Pugh, Dominique Watkins, Davon Watkins, Dawan Watkins, Dreyon Watkins and Jawan Watkins. Four great nieces Tamiya, Kendall, Autumn, and Ava. Stepfather Harry Conway, who proceeded him in death. Brother in law Johnny Pugh, sister in law Trina Watkins Father in law Jerome Tate and sister in laws Stacy and Tracy Tate, plus 10 additional sisters and one brother in law, and a host of family and friends.

Craig Lamont Watkins was born, May 11, 1971. To the late Hazel A. Watkins and Robert L. Watkins, Sr, who proceeded him in death. Craig was the youngest of 5 siblings. He departed this life after a lengthy illness. Craig received his education... View Obituary & Service Information

The family of Craig Lamont Watkins created this Life Tributes page to make it easy to share your memories.

Send flowers to the Watkins family.