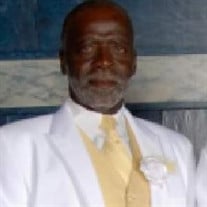 Legacy of Love Clifford King was born on September 29, 1953 to the late Nathaniel King and Margaret King Eleazer in Edgecombe, North Carolina. He is preceded in death by is his mother Margaret Eleazer; stepfather David Eleazer, father Nathaniel King Sr.; one brother Nathaniel King Jr.; grandson Tahmon Crutchfield and a brother-in-law William Mosley. Clifford received his diploma from Phillip High School in Battleboro, North Carolina. In 1977, he joined the United States Army. He dedicated 29 years to the military and retired with an honorable discharge. He traveled to many countries and lived five years in Germany with his family. He worked for the Henrico County Public Works for 27 years and the Richmond Convention Center. Clifford attended and was a member of Sandy Lane Church of Christ and was baptized under the leadership of Pastor Joseph Brown. He also was a member of the Masonic Lodge. Cliff as he was affectionately known loved his family and friends. He loved sports and his favorite team was the Raiders. He also enjoyed bowling and belonged to several bowling leagues. He was a lover of Jazz music. He was a man who loved taking care of his lawn and was a good handyman around the house. Cliff enjoyed barbecuing and washing his car with his son Alex. His son Tyrone recalls when his clothing items was missing in action, he knew exactly where it was. Cliff would wear it as if it was his own. His daughter Monica also recalls when she snuck out the house to a party dancing to EU and here come my Daddy tapping me on my shoulder from behind, busing her grove. On May 20, 1978 Clifford was united in marriage to his beautiful wife Thomasine Crutchfield. From this union three children were born, Monica, Tyrone and Alex. Clifford departed his life suddenly on June 21, 2021 at MCV Hospital to begin his eternal life with our Lord. Clifford leaves to cherish his memories a beloved wife of 43 years Thomasine King, one daughter, Monica Crutchfield; two sons, Tyrone King and Alex King (Nina); three brothers, Larry King, Gregory King (Jacqueline) and Karl King (Raylonda), three sisters, Cynthia Mosley, Eva Michelle King and Valeria Graham; sister-in-law, Tamie King; twelve grandchildren, six great-grandchildren, three devoted aunts, Lizzie King, Annie Johnson and Lucy Footman; and a host of nieces, nephews, cousins, friends and co-workers.

Legacy of Love Clifford King was born on September 29, 1953 to the late Nathaniel King and Margaret King Eleazer in Edgecombe, North Carolina. He is preceded in death by is his mother Margaret Eleazer; stepfather David Eleazer, father Nathaniel... View Obituary & Service Information

The family of Clifford King created this Life Tributes page to make it easy to share your memories.