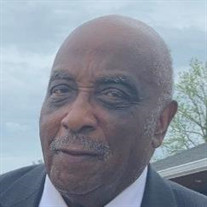 Claude 0. Burrell, Jr.. was born April 14, 1940 in the Henrico County Boar Swamp community. He received his ticket for his scat on the Glory Train, Heaven bound on May 24th, 2021 at 8:05pm in Richmond, Virginia. Claude was born to the late Claude 0. Burrell, Sr., and Mary Magdalene. He was the youngest of the four to this union. He was preceded in death by his three sisters, Elsie Cooper, Yvonne Nichols Battle ,and Lillie Mae Lightfoot. Claude attended Boar Swamp Elementary School and graduated from Virginia Randolph High School in 1957. He worked as a Short-Order Cook at Woolworth Department Store in downtown Richmond. It was at Woolworth, that he was introduced to the love of his lite Alice Hudson. They were joined in holy matrimony on July 7.1959. Claude was employed by C&P Telephone Company in 1962 as a Central Line Technician where he retired in 1998 after 35 years of service. Claude was baptized as a child at Rising Mount Zion Baptist Church (RMZBC) and attended BYTU, Sunday School, Varina and Fairfield Sunday School Union and the Star of East Association. He was a member of the Men's Usher Board, Male Chorus, Trustee Ministry, Church's Van Ministry and ordained into the Deacon's Ministry at RMZBC. He became Deacon Emeritus in 2017. He loved the Lord and his church and faithfully served in whatever capacity he could. Claude was a member of the King Solomon Masonic Lodge #27. He was also a faithful member of the Central Gardens Leisure Club, where he served as the chaplain. Up until the pandemic, he was a member of the McDonald's Social Breakfast Club where he enjoyed meeting up with friends and discussing community and world affairs for several hours every morning. Claude LOVED the Dallas Cowboys and the Highland Springs High School football team. He attended every Friday night game until the pandemic paused the season. Claude was preceded in death by his parents, three sisters, and loving wife, Alice M. Burrell. He is survived by his caring and loving children, Claude Anthony (Letitia); Sheryl (Thomas) and Yvonne. He was a doting grandfather to his five (5) grandchildren: Terence, Justin, Danielle, Janai and Joshua. Claude also leaves two brothers-in-law, Melvin Cooper and Jessie Hudson; two sisters-in law, Romanta Robinson and Constance (Gilbert) Lightfoot and a host of caring nieces and nephews on both sides; cousins from near and far and two devoted brotherly friends George Jude and Leroy Atkins.

Claude 0. Burrell, Jr.. was born April 14, 1940 in the Henrico County Boar Swamp community. He received his ticket for his scat on the Glory Train, Heaven bound on May 24th, 2021 at 8:05pm in Richmond, Virginia. Claude was born to the late... View Obituary & Service Information

The family of Claude O. Burrell, Jr. created this Life Tributes page to make it easy to share your memories.

Send flowers to the Burrell, family.