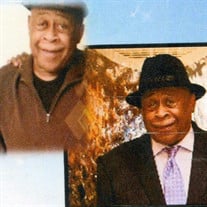 Clarence Xavier Wynn affectionately known as "Frog" was born on March 11, 1944, in Baltimore, Maryland to the late Charles Wynn & Gertrude Harris. He departed this life and went home to everlasting rest on Sunday, March 27, 2021. Clarence was educated in the Catholic School System and graduated from Frederick Douglas High School. At an early age he practiced and studied Catholicism, where he was baptized and confirmed at St. Peter Claver Catholic Church in Baltimore, Maryland. Lather in life he attended Greater Harvest Baptist Church under the leadership of Pastor Errol Gilliard, Sr. Clarence enjoyed politics and worked on several successful campaigns for Senator Joan Carter Conway, Mayor Martin O'Malley and other local politicians. Clarence knew the power of his voice and the voice of others if we exercised our right to vote to bring change to our community. Clarence was a long-standing dedicated employee of the City of Baltimore where his servitude became his passion for the rest of his life. For 25 years Clarence was a Human Service Worker with Urban Services Baltimore City Housing Department, as well as Assistant to the Mayor under Martin O'Malley Administration. Clarence worked with Tim Conway on the Operation Champ Project and the GUN Ban movement for Baltimore City' he chaired the 1999 Baltimore AFRAM Festival under Mayor Kurt Schmoke Frog had many ventures, one he was proud of was the collaboration with Tim Bobby Moore and his daughter Teressa forming CIG Transportation providing Noxzell employees transportation from Baltimore City to Hunt Valley, Maryland. In addition, he co-speared the revitalization of Stop, Shop and Save Grocery Store on Pennsylvania Avenue with Tessa Hill, to redevelop the community market. Frog enjoyed his passion of working with several city agencies becoming a pioneer of helping the residents in need. This covered food, addictions, homelessness, emergency services, he was there. He touched the lives of so many. Wherever he went people would say "Frog helped me with whatever their needs were." As a teenager, Frog was learning the adventure of meeting beautiful queens. He met the gorgeous "Ida". They had to learn to grow up fast because Jeff was on the way. Thank God for senior family members because (Ida & Frog) had an overwhelming amount of support. Later came the late Wanda Privitt, Frog's oldest daughter. Patsy, Gold Street. Sarah Tyler's granddaughter Frog told Tim "man I really like her. I'll be friends with her brothers," and it worked. While the baby Kirt was on the way, they decided to get married. Unbeknownst to them the preacher didn't have a license. However, they went on to have Romey and Smash. Their friendship continued as strong as a sibling bond. Carolyn Wynn (Wife) in the 70's. Known as Bonnie & Clyde. Together they bonded their union in 1976 and had the famous Seagull wedding. Carolyn & Frog, Angie, Shane and later came Jamika. Norrice in 1989. Together they formed a family and strived to concur the world. Leading the (children), Chico, Thomas III, "Twins" Chanell & Sherrell. Frog's family decided to form the Davis Family Men's Group. Frog was a proud member who enjoyed every minute. You could look forward to seeing him dressed in his member shirt. He would talk about waiting for his nephew Key Key or Cousin Tink to pick him up for the men's club meetings. Frog was smooth and charismatic, he possessed the characteristics of a chameleon and fit in to any and every situation. He loved to dress for formal affairs in his suits and matching fedora's, and when he was laid back and shooting the breeze with friends and family you could find him with his cap turn around backwards, jeans and tennis shoes to match and his box of communion wine by his side. He was a fun-loving person to be around, and many people claimed him as their own. Frog used his street knowledge for good, talking to young folks, confessing about some of his experiences and helping many people to get into rehab. He was the life of the party, the gentleman in the boardrooom, and the man that stood confident in his truths, that in life he would live unapologetically free. Everyone loved hanging around him, he enjoyed dancing, laughing, joking, and having a good time with family and friends. Nothing brought Frog more joy than celebrating his family accomplishments, taking part in their every event from weddings, graduations, birthdays to cook-outs and bay showers, he was there, you could count on his presence. He always bragged on his children. He was proud of them and always expressed his love for them. Preceding him in death was his parents Charles Wynn and Gertrude Harris, wife Carolyn, daughter Wanda Privitt, four siblings Jerry, Paul, Barbara, and Carrie Wynn Clarence's love and memory will be cherished for days and years to come by his devoted children, Jeffrey (Glendoria) Rogers, Kirt and Jerome Rogers, Teressa (Tyrone) Hall, Derrick (Ebony) Williams, Marcus Harris, Jamika Wynn, Angie Davis, Ernest Taylor, Sherrell (Michael) Whye, Channell (Terrelle) Jones, Chico Cannady, and Thomas Matthews; Grandchildren, Jeffren, Theressa, Nakiya, Jerome, Jerrick, Tymikia, Tysheira, Ziare, Anyriah, Devin, Matieus, Macee, Shemar, Ramirez, Liam, Noelani, Marcia, Tariq, Sanaa, Dereck, Tyleese, Thomas, Ronald, Sade, Shane, Aleah and Zyiara; Great Grandchildren, Ty'ione and Kendall; brother, Charlie Wynn; In-laws, Madeline Harrison, Margaret Johns, Elaine Godwin, Gwen Curry, Cynthia and Gerald Davis; several close friends Joan Carter Conway, Bobby Moore,Tom and Cousin Delores Brown; his secial friend Beulah Lucas and a host of other relatives and friends.

The family of Clarence X. Wynn created this Life Tributes page to make it easy to share your memories.

Send flowers to the Wynn family.