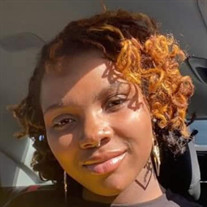 The angels of heaven welcomed home, Miss Cierra LaChelle Jackson Cierra Lachelle Jackson, 20, of Richmond; Virginia departed this earthly life to be with the Lord Thursday, July 22, 2021. She was born to proud parents, Tanika Scott-Jackson and Corey Jackson, Sr. She was lovingly known to family and friends as "CeeCee". She was preceded in death by her loving brother, Daequon Darrin Glover and great grandfather, Leon Hicks Sr. Cierra attended Henrico and Hanover Counties Public Schools. She graduated from Lee Davis High School in Hanover County on June 16, 2018. Cierra played volleyball at Highland Springs High School. Cierra was a cheerleader for Glen Lea Recreation Center in Henrico County. Cierra pursued higher education at Richard Bland College of William and Mary in Petersburg, Virginia. Cierra graduated with an Associate's Degree in Applied Science in May 2020. Cierra was enrolled to attend Norfolk State University in the fall of 2021 to continue her education and to receive a Bachelor's Degree in Psychology. Cierra accepted Christ at an early age and was baptized at Hood Temple A.M.E. Zion Church where she was a lifetime member. She sung in the Children and Young Adult Choir. Cierra was very active in the Praise Dance Ministry. She was one of the leaders and coaches of the Praise Dance Team. When Cierra performed praise dancing, she used her body as a simple expression of movement to communicate with God and to communicate God' s heart to His people. Cierra's praise dancing sent the Gospel message of Jesus Christ in a way that may not be received or understood through the hearing of the Gospel. Her dance movements were so graceful and captivating that one's individual soul could be connected to God by the way she used herself to express the word and spirit. Cierra loved spending time with family and friends. She had a sweet spirit that when you meet her, you instantly love her because of her personality. Cierra was always willing to lend a helping hand at family functions or events. She loved her family dearly. When her father became ill and needed a kidney transplant, Cierra volunteered and stepped up to the calling to donate one of her kidneys to her father. The kidney transplant surgery for both Cierra and her father was successful in February in 2021. This act of kindness shows how Cierra was a loving person and a child of God. Cierra was kind hearted, devoted to her parents and siblings; and a friend who will be greatly missed, but her spirit lives on through all of us. Leaving behind to cherish her memory are her loving mother, Tanika Scott-Jackson; father, Corey Jackson Sr.; sisters, Danika Glover (Paul), Unique Cannon and Faith Scott; brother, Corey Jackson, Jr. (LaShera); grandmothers, Brenda L. Hicks (maternal) and Lindell Jackson (paternal); grandfathers, Christopher Scott (maternal) and Bernard Lewis, Sr. (paternal); great grandmother, Margaret S. Hicks (maternal); nephews, Paul Quinn,Jr., Sincere Jackson and Dallas Canada; nieces, Paris Quinn and Saydi Cannon; devoted cousin, Dyshawn Hicks of whom she called her brother; devoted aunt, Crystal H. Reid (Kevin); godmothers, Angie Brown and Dawn Hobbs; god sisters, Jataun Hobbs, Laporcha and Donnesha Brown; a host of aunts, uncles and cousins; and other relatives and friends.

The family of Cierra LaChelle Jackson created this Life Tributes page to make it easy to share your memories.