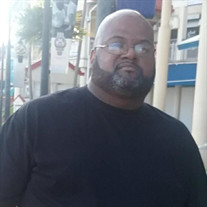 Not sure what to send?

Christopher James Snead was born on December 16, 1972, to the late Frances Diana Wimbush and Earl Young, Sr., in Richmond, Virginia. Educated in the Henrico County Public School system, Chris graduated from Henrico High School and later attended Norfolk State University. Christopher James Snead departed his this life suddenly on the morning of January 11, 2022. He is preceded in death by his mother, Frances D. Wimbush, maternal grandparents Mr. and Mrs. Dowel Johnson, paternal grand-parents Mr. and Mrs. Henry Edward Young, Sr. and father-in-law, Henry J. Callis. Chris was a devoted husband, father, son, brother, uncle and friend. After several years of attending faithfully, he became an active member of The Saint Paul’s Baptist Church (CRE) in Richmond, VA on November 22, 2015. Employed under the Department of Juvenile Justice, Chris worked at Beaumont and Bon Air Correctional Centers for 15 years working his way up the ranks to Community Coordinator befriending many who became like family over the years. For 12 years, Chris coached football and mentored many children of the Metropolitan Youth Football League for the Chamberlayne Packers. Among those he coached were his very own sons, Keyondre and Ky’mani–each from the time they were 5 years of age. When he was not on the field coaching, he could often be found cooking in the concession stand of Klehr Field in Chamberlayne Farms. Chris was happiest when he was cooking and watching people get their stomachs full off of whatever culinary masterpiece he might be preparing for the day. Affectionately known as “a gentle giant” or “big teddy bear,” Chris had a heart of gold and would help anyone in need. He welcomed everyone with open arms and a warm smile. He was definitely a warm hearted friend and family man. He will surely be missed by many who knew him. Chris leaves his precious memories to his devoted wife of 15 years, Narita, three sons, Antwontan, Keyondre and Ky’mani; granddaughter, Har’mani Thompson; godson, Tristian Bruce; fathers, Emmett Wimbush, James Snead (Shellawease) and Earl Young, Sr. (Karen); siblings; Tyrone Snead, Nakita Snead (Tony), Jennifer Snead, Michael Wimbush (Stephanie), Erica Wright, Kevonnie Shelton, Earl Young, Jr; Keisha Young, and Shannon Johnson; sister-in-law, Silena (Defonte) Motley; his mother-in-love, Bernathia Callis, best friends for over 40 years, Anthony and Tiffaney Bruce; Richard (Karen) Athy; Andrew L. Harvey; sister/cousin Katina “Lew Lew” Logan (Durand) and barber/friend of 20 years, Richard (Kelley) Williams, along with a host of aunts, uncles, nieces, nephews, cousins and friends.

The family of Christopher James Snead created this Life Tributes page to make it easy to share your memories.