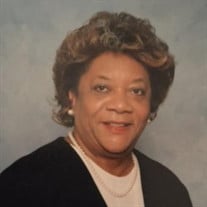 CHRISTINE GRAY BIRCH, daughter of the late Charlie Brown and Levater Miles Brown was born on October 18, 1936 in Dillon County, South Carolina. Christine was the youngest of 10 siblings which all preceded her in death. God called her home to Glory on September 23, 2021 Christine received her early education in South Carolina. At the age of 18 she moved to Baltimore, Maryland. In 1968, she completed the Baltimore City Public Schools, Division of Secondary, Vocational and Adult Education as a Practical Nurse. After successfully passing the Maryland State Board of Examiners of nurses, she became a Licensed Practical Nurse in August, 1968. Her last employment was with St. Elizabeth Nursing Rehabilitation Center where she remained for over 30 years before retiring. As a nurse she bonded with many of the elderly nuns that she cared for and would frequently visit them after she retired. Christine had a heart and love for meeting people. She was always the first to introduce herself and engage in conversation. Before long she would have gained a lifelong friend. Christine was called “Nurse Nancy” because she took care of everyone. She was the captain of her senior apartment community, The Greens at Rolling Road and checked in nightly on everyone to make sure they were okay. She saved many lives while she was a resident there. She loved visiting friends and people in hospitals and nursing homes. For recreation, she loved to bowl, go to the casino, travel on bus trips and cruise with friends. Christine accepted the Lord Jesus Christ as her personal Savior at an early age. She joined Morning Star Baptist Church under the late Rev. Jentry McDonald, Sr. She was a member for over 35 years and belonged to many ministries, as in the Music Ministry, the Birthday Club and the Jentry E. McDonald Theatron Players. Christine loved acting and performed in many of the dinner theatre events. She was a devoted learner of the Word and attended weekly bible study. She was also a proud graduate of the Morning Star Discipleship Program under Bishop Dwayne C. Debnam, Pastor. She loved her church family and enjoyed volunteering whenever she could. Christine married the late Lester Gray in 1970, the late Taylor Baytops in 1983 and the late Johnnie Birch in 2004. Her daughter Brenda Kaye Smith preceded her in death in 1992. She leaves to cherish her memory, her nieces, Barbara Hayes and Stacey Thomas (goddaughter) and Dawn Brooks; nephews, Hampton Brooks and James Wheeler; a great-nephew, Tyrone Thompson; a host of other nieces and nephews; a devoted friend, Samuel Dublin; her adopted family, Mr. & Mrs. Lee Haskins & Joan Washington & Family; goddaughter, Annette March-Grier and her daughter Julia Grier, whom she cared for as a child and adored; caregivers ,Cora and Billie Hunt; and other relatives and friends.

CHRISTINE GRAY BIRCH, daughter of the late Charlie Brown and Levater Miles Brown was born on October 18, 1936 in Dillon County, South Carolina. Christine was the youngest of 10 siblings which all preceded her in death. God called her home... View Obituary & Service Information

The family of Christine Gray Birch created this Life Tributes page to make it easy to share your memories.

CHRISTINE GRAY BIRCH, daughter of the late Charlie Brown and...

Send flowers to the Birch family.