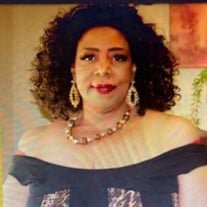 On Thursday, May 6, 2021 our Almighty God called from labor to reward one of His remarkable daughters, CHERYL RENEE WILLIAMS. Cheryl was born to the late Ida Normel Harris Williams and Wilbert Edward Williams on September 23, 1963, in Baltimore, Maryland. Cheryl, affectionately known as “Nae,” was the eldest of three children. Cheryl had an inspiring and eventful academic career. She was educated through the Baltimore City Public School System until the age of thirteen (13), when she chose to attend a gifted institution, Wye Institute of Maryland. Three years later, at the age of sixteen (16), Cheryl graduated with a general high school diploma and an associates degree in creative writing. Upon graduating, she attended Coppin State University and earned two bachelor degrees; a Bachelor of Science in Psychology and a Bachelor of Science in Education. During her childhood, Cheryl attended New Unity Church where she developed a very intimate relationship with God. As an adult, she was a beloved member of the Pentecostal Church of Deliverance under the leadership of Pastor Mary Brice. Cheryl was a published author. Two of her most popular books were “Some Reasons Why Kids Gone By” and “Tears Left Uncried”. She also owned a printing company entitled Raspberry Press and a business where she sold merchandise which included custom umbrellas and shirts, satin gloves, jewelry, and many more useful and practical items. Cheryl was a God-fearing, kind-spirited woman and was a blessing to her family, friends and everyone who knew her. She enjoyed praying, writing, singing, creating and attending church. She also cherished and had an undying love for Stevie Wonder and his music. She was joined in a union before Christ to Charlie Lee, who preceded her in death. Cheryl leaves behind to cherish her memory: her sisters, Sherri Lynn and Kimberly Lynette; nieces, Tyneesha Nasha’, Tyshaurna Danae’ Myshaurna Lanae’ and Taylor Renee’; her great nephews and niece, Kayden Josue, Davion Kaileem and Victoria Olivia; her aunts, Virginia (Wy) Harris Hayes, Blanche Harris Fegans, Marion Harris Wynn, Delores Harris Mitchell, and Jerdeliene (Jeri) Harris Swann; her fur baby, Spice, and a host of cousins, relatives and friends. She was preceded in death by her parents, Ida and Wilbert Williams; her aunts, Panthea Harris Blackwell; and her uncles, Christopher Colombus Harris, William Harris, Marvin Harris, Charles Harris, Samuel Harris and John Harris.

On Thursday, May 6, 2021 our Almighty God called from labor to reward one of His remarkable daughters, CHERYL RENEE WILLIAMS. Cheryl was born to the late Ida Normel Harris Williams and Wilbert Edward Williams on September 23, 1963, in Baltimore,... View Obituary & Service Information

The family of Cheryl Williams created this Life Tributes page to make it easy to share your memories.