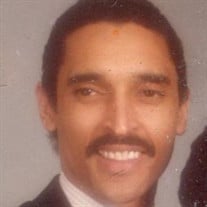 CHARLES C. WOODLAND, son of the late Charles C. Woodland Jr. and Corrine Woodland, was born on November 9, 1950 in Baltimore, Maryland. On August 9, 2021, after a brief illness, he peacefully slipped away, with his wife and son by his side. Educated in the Baltimore City Public School System, Charles was a graduate of Forest Park High School and attended Morgan State College (now University) for two years. At that time, he was inducted into the United States Army, where he served as a Military Policeman before receiving his honorable discharge. Charles began a career in retail management where he remained for many years. With his extensive knowledge and magnetic personality, he was considered to be the very best, right up until his retirement...and people still called him for his advice. “Charlie” and his wife Maxine were a loving, devoted couple for forty two years; and from that union their son Christopher Charles Woodland was born. Remembered by all who knew him as an avid spectator of sports, Charlie’s love of golf was infectious. While he thoroughly enjoyed playing with some great friends, his most treasured times were playing with his son Chris. Even when Charlie could not play anymore, due to illness, he still went to the golf course with Chris so he could watch him play. He often videotaped Chris as he practiced at the driving range, giving him advice. Charlie’s love for his son was undeniable. Charles leaves to cherish his memory: his wife, Maxine; son, Christopher (Kristen); sister- and brother-in-law, Myra and Paul Rosenberg of Alexandria, Virginia; Darrell Jones of New York, New York; Gale Kilgore of Baltimore, Maryland; other family members and a host of wonderful friends who loved and respected him to the highest.

CHARLES C. WOODLAND, son of the late Charles C. Woodland Jr. and Corrine Woodland, was born on November 9, 1950 in Baltimore, Maryland. On August 9, 2021, after a brief illness, he peacefully slipped away, with his wife and son by his... View Obituary & Service Information

The family of Charles Woodland created this Life Tributes page to make it easy to share your memories.

Send flowers to the Woodland family.