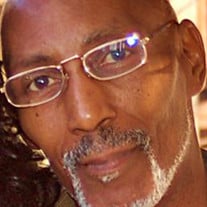 Charles Jerome Hamilton, nicknamed P’Nut, was born to Betty Vaughn and Jerome Hamilton on August 29, 1956. Charles was educated in the Baltimore City School System. He met, fell in love with, and married Vanessa Kennedy. They remained inseparable for 40 years and were affectionately known by each other as Nut & Whip. Charles loved to laugh, and had a natural ability to make everyone laugh. Just being a comedian came naturally to him; he teased and joked with everyone around him. Charles was described as loving, comical, giving and one of a kind – as well as calm, funny, and one with whom you could relax around. He made numerous friends wherever he went and always left a lasting friendly impression. Charles taught us the meaning of unconditional love which he demonstrated by his patience, love and peaceful nature. He was willing to do whatever was necessary for his loved ones and his presence will be sorely missed. He possessed a strong work ethic and believed in providing for and protecting his family. Sometimes working numerous jobs to care for his family which was his number one priority. Charles loved to cook. He was at his best in the kitchen especially during the holidays. He loved the holiday season and would prepare the entire meal for family gatherings. He took great pleasure in cooking and baking which made him so happy! On Monday, March 1, 2021, Charles transitioned from life on earth to eternal life with God the Father. He was preceded in death by his son Charles Jerome Hamilton and his sister Wanda Y. Hamilton. Charles leaves to celebrate his life: his loving wife, Vanessa Kennedy-Hamilton; mother, Betty Vaughn; step-father, Emmanuel Vaughn, sons, Theron Goines and Dante Hamilton; brothers, Melvin (Gil) Dunaway, Darryl Dunaway, and Daniel Clark (DC); sister, Angela Rhodes; six grandchildren; uncle, Charles (RC) Rhodes and seven aunts; sister-in-laws, Veronica Beverly, Karen Kennedy and Ceta Dunaway; brother-in-laws, Bryan Beverly and Kevin Kennedy; and a host of nieces, nephews and cousins.

Charles Jerome Hamilton, nicknamed P&#8217;Nut, was born to Betty Vaughn and Jerome Hamilton on August 29, 1956. Charles was educated in the Baltimore City School System. He met, fell in love with, and married Vanessa Kennedy. They remained... View Obituary & Service Information

The family of Charles Jerome Hamilton created this Life Tributes page to make it easy to share your memories.

Send flowers to the Hamilton family.