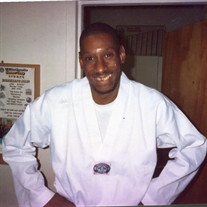 CHARLES ALFRED GRANDY, youngest child and son of Mary Elizabeth Grandy and the late Jesse Grandy, Sr., was born on February 24, 1959 in Baltimore, Maryland. Sadly, he suddenly departed this life on December 29, 2021. He received his education in the Baltimore City Public Schools. Charles graduated from Patterson High School, Baltimore Maryland, in 1978. After graduating from high school, he joined the United States Army in 1980. His entry base was Fort Lee, Virginia. Charles faithfully served his country in the U.S. Army Control Group, based in St. Louis, Missouri, receiving an Honorable Discharge in November 1980. After leaving the Army, Charles entered the work world, working a period of time with the PEP Organization. Charles developed some carpentry skills, while working with PEP. Charles’ favorite sport included playing and watching basketball. As a young man, blessed with height and ability, Charles played basketball as much as he could. He excelled playing the game he loved so much. Charles even played basketball at Patterson H.S. while he was a student. Charles was an avid watcher of basketball games on TV. His favorite basketball team was the Philadelphia 76’s, with Dr. J. as his favorite player. The other hobby Charles loved was Karate – (Taekwondo). He trained and competed, winning several awards and trophies as he became more proficient in the sport. Charles also excelled in this sport. He leaves to cherish his memory: his mother, Mary E. Grandy; one sister, Sharon E. Gay; two brothers, Jesse Grandy, Jr. and Michael Grandy; a brother-in-law, Leon Gay; several cousins and friends.

CHARLES ALFRED GRANDY, youngest child and son of Mary Elizabeth Grandy and the late Jesse Grandy, Sr., was born on February 24, 1959 in Baltimore, Maryland. Sadly, he suddenly departed this life on December 29, 2021. He received his education... View Obituary & Service Information

The family of Charles Alfred Grandy created this Life Tributes page to make it easy to share your memories.

Send flowers to the Grandy family.