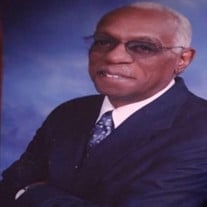 Charles Matthew Bryant was born August 8, 1946, in Baltimore, Maryland to the late Imerdean and Theodore Bryant. He departed this life on Thursday, March 24, 2022. He received his formal education from the Baltimore City Public School System. After graduating from Douglas High School, Charles relocated to Amherst, Massachusetts, where he was employed at the University of Massachusetts, Amherst. After 30 years of loyal and dedicated service, he retired from UMass Amherst and returned to Baltimore to be with his family. Charles began attending Calvary Baptist Church, Baltimore, MD, and having professed Christ as his personal Savior, he readily became active in the ministry. On March 7, 2010, Charles received his Certificate of Membership under the pastorate of Rev. Dr. Stephen J. Russell, Jr., Senior Pastor. He served faithfully as a member of the Male Chorus. He was also a member of the Transportation Ministry, where church members knew they could depend on his patient and safe service as a church bus driver. He was preceded in death by his siblings: Theodore Bryant, Jr., Nathaniel Bryant, Phillip Bryant, and Cynthia Bryant, as well as a very special companion, Juanita “June” Harris. Those left with precious memories are his siblings: LaVerne Bankins, Irene Sharpe, Janice Silver, Clarice Bryant, Brenda Bryant, Henry Bryant, and Leonard Bryant; Cousins: Maxine Bryant and Marion Cook; Cousin-In-Law: Geraldia Robinson; a host of nieces and nephews and great nieces and nephews. Also, cherishing Charles’ memory are his best friends: El and Marlene Sterling (Miami, FL), Van and Novelle Jackson (Virginia) and his godson, Jonathan Sterling. Charles also touched the lives of his long-time next-door neighbors, Carol and Steve. These neighbors became warm, caring, and compassionate extended family over more than 20 years that they lived next door to each other. Many birthday parties, holidays and other special events became shared celebrations using both of their back yards, grills, tables, and chairs. There were also many, many evenings spent just sitting on their back porches talking, laughing, and relaxing together.

Charles Matthew Bryant was born August 8, 1946, in Baltimore, Maryland to the late Imerdean and Theodore Bryant. He departed this life on Thursday, March 24, 2022. He received his formal education from the Baltimore City Public School System.... View Obituary & Service Information

The family of Charles Matthew Bryant created this Life Tributes page to make it easy to share your memories.

Send flowers to the Bryant family.