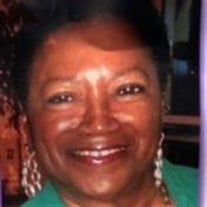 CHARLENE DEBORAH PINDELL, affectionately known as Debbie, entered this world on May 3, 1948 to the late Charles and Dora Frances McCormick. She was the eldest child from this union, She had a great relationship with her mother and she would respectfully talk to her about everything. Char attended Baltimore City Public Schools. She earned her diploma from Forest Park High School, Class of 1966. She furthered her education at Morgan State University and was a member of the ROTC. Char was very active. She had a special love for art and painting, She began her career at Hartford Steam Boilers alongside her sister, Christine. Her final job was Vice President of American Community Management (ACM) where she recently employed She served ACM for over 0 years and managed many of the communities in their Baltimore portfolio including construction and rehab projects. She was very hard worker and was devoted to her duties and responsibilities. She constantly asked for her computer to check her emails even in her time from her job. In 1970, Charlene married the love of her life, Leonard Pindell, Sr. From this union, her one and only son, Leonard Pindell Jr. aka “Lenny” was born whom she cherished and devoted her life to. She was blessed with a daughter, Tracey Green who preceded her in death. She was later blessed with an amazing daughter, Tomeka Pindell who would do anything for Char, and Char would do anything for Tomeka, Char dedicated her life to family and friends, but especially to her son, Lenny, She loved and adored him immensely. She was determined to always give him the best of her and the world. Char continued this love for her Niece Dora. Char stepped in as a primary “Mama” after her baby sister Thomasine “Mootsie” Parrott whom she held close in her heart departed this life on November 14, 2017. There was no question of the love for her family, friends or God. She accepted Christ as her personal Savior at a young age. She was baptized at Israel Baptist Church as was her mother, grandmothers, and aunts before her. Charlene loved God. She became a member of St. Ann's Catholic Church in the “70s. She would make sure to share daily blessings and anointing of oil with her husband as they entered and exited their home. Charlene was the matriarch of the McCormick/Pindell family. She had a loving spirit and a welcoming heart. She constantly put others before herself and loved her family and friends dearly. She would host the family. Gatherings making sure each family, friend, coworker and their favorite dish was accounted for you. You could talk to Charlene about absolutely anything. She was a great listener and advisor with the most humbling, demanding side The family often laughed about her bionic ears and how there was no such thing as a whisper around her, However, she would not forget to an any encounter with the most warming hug,kiss, and “ I Love you Boop!!” Charlene “Debbie” Pindell departed this life on May 5, 2021 after a brief illness. Her family surrounded her with comfort and support throughout her final hours. Her loving husband was there with her as quietly and peacefully transitioned. Every, during this difficult time she was supported and cared for with the utmost respect and dignity she deserved with the loyalty of her husband, son and niece Dorian who promised to stay by her side. She was gently cared for with the help of Dora, Tomeka, Lisa, and Wynn all in the enjoyment of her sister Christine's meals. She leave to cherish fond memories her husband, Leonard Sr,; her son, Leonard Jr.; daughter, Tomeka; bonus daughter, Lisa; siblings, Christine, Robert Sr., Wynn and Sandy (of her loving sister Thomasine who preceded her in death); six grandchildren, Lynae, Chaz, DaeSean, Keona, Angelecia, and Jason Jr.; great-grandchild, Blake; two nephews, Leon and Robert Jr.; three nieces, Dorian, Dora, and Chanda; sister-in-law, Michele; seven great - nieces, three great-nephews; two great-great-nieces and a great -great nephew; a first cousin, Gloria S.; a special group of devoted friends, Denise, Jewell, Ladell, Stephine, Consuela and Gloria N,; and an amazing host of other relatives and friends, Madeline, Maxine and Nina preceded her in death.

CHARLENE DEBORAH PINDELL, affectionately known as Debbie, entered this world on May 3, 1948 to the late Charles and Dora Frances McCormick. She was the eldest child from this union, She had a great relationship with her mother and she would... View Obituary & Service Information

The family of Charlene Pindell created this Life Tributes page to make it easy to share your memories.

Send flowers to the Pindell family.