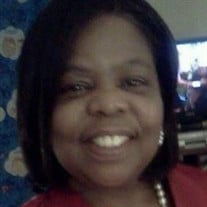 Legacy of Love Charlene Evelyn Grant was born on August 15, 1954 in Richmond, Virginia to Joseph J. Durham, Jr. and Charlotte E. Durham. Charlene attended the Richmond Public School John Marshall High School where she graduated. She furthered her educated and attended the College of Johnson C. Smith whereby she received her Bachelor’s Degree in Physical Education. While attending she pledged the sisterhood sorority of Delta Sigma Theta. She later went on to pursue her Master’s Degree at VCU College in Public Administration. As a youth she joined First African Baptist Church. She participated in all activities afforded to youths. She was also in the Girls Scout as a “Brownie” at All Soul’s Presbyterian Church. Charlene was also active as a Zetarette under Alpha Phi Zeta Chapter of Zeta Phi Beta, Inc. as a youth. She excelled at playing the piano and organ. While in college, she was a cheerleader as in high school. Charlene was united in holy matrimony to Terrence Grant on September 21, 2020 in Richmond, Virginia. Their union was blessed with one child, Cierra D. Grant. She also sang in the church choir, “Fab Singers”. She was employed at Bellwood Defense Center and from there she later worked at the McGuire Veterans Hospital until she retired after 37 dedicated years of service, due to her health. Charlene enjoyed traveling, shopping and sports. She leaves to cherish her memory: caring husband, Terrance A. grant, Sr.; son, Dwayne L. Smith; daughter, Cierra D. Grant; four grandchildren, HaSean, Mekhi, Zayvion and KriShaud; six stepchildren, two brothers, Joseph J. Durham, III (Marylyn) and Tyrone Durham; one nephew, Joseph J. Durham IV; and a host of cousins and friends; three devoted, Wanda Bagby, Gail Peeples and Frances Jordan. God’s Garden by Katie Evans He put his arms around you and lifted you to rest. God’s garden must be beautiful He always takes the best.

The family of Charlene Evelyn Grant created this Life Tributes page to make it easy to share your memories.

Send flowers to the Grant family.