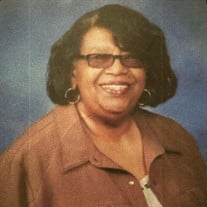 Catherine Rosetta Davis Williams born in Baltimore City, Maryland on March 3, 1940, to the late Catherine Thompson Davis and Edward H. Davis, Sr. She was the fifth child and youngest daughter. Catherine was affectionately called 'Pipe. On May 2, 2022, the Lord said to Catherine, "Come to Me." Catherine was the loving mother of three sons; 19 grandchildren, 19 great-grandchildren, an adopted daughter, and two Godsons, who called her 'Booby.' Catherine was married to late Adolph E. Williams and no children were born of this union. Catherine was the loving sister of four sister, Edna Washington, Carrie Boyd, Bernice Haskins, and Shirley Bowmen, all who preceded her in death. She has two brothers, Catherine had a loving relationship with Ulyssess DuBose aka Racetrack. Catherine grew p in Baltimore City where she was educated in the Baltimore City Public School System. She was a homemaker, domestic worker, co-owner of A & C Grocery Store, clerk at Read's Drug Store, and a community volunteer with the Johns Hopkins Nursing Staff. Catherine was known for her baking and received a culinary certificate from Baltimore City "Eating Together Program." Her specialty was sweet potatoes pies. She enjoyed painting and was known as a "free-lance artist." Catherine was a celebrity. She was a guest on the Price is Right TV show with Bob Barker where she won a car. She had a cameo appearance in the movie, Hairspray. Catherine was a lifelong member of Eastern United Methodist Church where she joined on September 26, 1981 under the pastorate of Reverend Clarence Weeks. In addition to being baptized at Eastern, she was baptized in the Holy Land. At Eastern, she served as Vice President of the Usher Board, was a Certified Lay Speaker, was a Member of the United Methodist Women, Golden Links, Season Seniors and was a member on numerous committees. Catherine loved singing, she sang with the United Voices of Eastern, Eastern Ensemble, Inspirational Chorus, Sanctuary Choir and Reunion Choir. She remained a faithful, dedicated member who rarely missed a church service until she became ill. She loved the Lord and her church family. Catherine leaves to cherish her memory: three sons, Gary S. Davis, George S. Nicholson, Clinton J. Davis (Vernice); brothers Edwards M. Davis, III, Albert L. Davis, Sr., (Marie); adopted daughter Audrey Bush; godsons, Micah and Stephen; an uncle Oscar Davis; host of grandchildren, great-grandchildren, nephews, nieces, cousins, and her Eastern United Methodist Church family. Catherine fought a good fight and now she is gone to be with her Lord and Savior.

The family of Catherine R. Williams created this Life Tributes page to make it easy to share your memories.