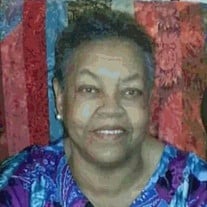 CATHERINE GREEN GORDON (affectionately called Cat) was born in Apex, NC on March 16, 1941 to the late Allen Green and Annie Mae Laster Green. She was raised in Baltimore, first in Turner Station and then Cherry Hill, where she joined Cherry Hill Presbyterian Church. Cat was the firstborn of four children and a true nurturer from the start, watching over her younger siblings while her parents worked and threatening her brothers and sister with “I’m going to tell Mother” when they got into situations where they might get hurt-like falling from the top of a tree and “getting the wind knocked out”. She was always there when they needed her then, and as adults, always willing to travel with Cecelia on her “adventures” down unknown paths just to make sure she was safe. Cat showed that same nurturing spirit toward her friends, loving and praying for them until they called to say that they had arrived home safely after visits. She met the love of her life, Clifton Gordon, when he came to stay with his Aunt andUncle next door. Cat and Cliff would sit on their porches talking through the fence. Cliff could often be seen coming up from the bus stop carrying a treat for “Hon” as he affectionately called her. They married at Cherry Hill Presbyterian Church on March 18th, 1959. On June 2nd, 1964, Cat and Cliff welcomed their first son into the world – Byron. He was followed four years later by their second son, Robert, on April 20th, 1968. Becoming a mom was when her nurturing spirit really blossomed, as she became an amazing mother for their sons. Her supportive nature extended to nieces and nephews, and on to the next generation, as she lavished her love and attention on her grandchildren, taking them out for afterschool snacks and dinners, attending their special functions, cheering them on and taking pride in their every accomplishment. Cat became a member of Fulton Baptist Church where she sang on the choir and later joined Greater Harvest Baptist Church and served as a Deaconess and Usher. She worked as a Switchboard Operator at The Lord Baltimore Hotel, office worker at Schmidt’s Bakery, and Hardware Distribution at AAI Engineering Company. On Cat’s 80th Birthday, she got to celebrate twice - once down here with us and a second time in her Heavenly Mansion with her husband, Cliff, Mother and Daddy, and brothers Allen Green, Jr. and Richard Wayne Green. Cat is survived by her sons, Byron Gordon and Robert Gordon (Teri Gordon – the daughter she never had); sister, Cecelia McLeod (Lee); granddaughters, Maiella Brown, Kerstacia Brown, Sophia Gordon, Sahara Gordon, and Angel Leggett; sister-in-law, Judith Green; nieces, Michele Marshall and Erica Lyons; nephews, Michael McLeod, Marc Green, and Brian Green; and a host of great-nieces and -nephews. She was also loved by her best friend, Hattie Woodson and her extended McLeod family. Our family is at peace, with full faith that Cat is truly the happiest she has been since her husband, Cliff, went on ahead to put his “Cliff touches” on their Heavenly Mansion, and start growing the collard greens that Mother cooked when Cat got home. They are probably smelling up Heaven right now with those pig feet and Dreazy Dreens GreasyGreens). You can almost hear their lips smacking down here. God is so good

CATHERINE GREEN GORDON (affectionately called Cat) was born in Apex, NC on March 16, 1941 to the late Allen Green and Annie Mae Laster Green. She was raised in Baltimore, first in Turner Station and then Cherry Hill, where she joined Cherry... View Obituary & Service Information

The family of Catherine Gordon created this Life Tributes page to make it easy to share your memories.

Send flowers to the Gordon family.