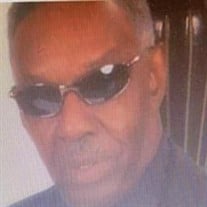 CARROLL HOLMES, son of Henry and Mildred Holmes, was born on January 7,1938. When Carroll was born the world gained someone special. Carroll was educated in the Baltimore City Public School System. In 1956, Carroll married the love of his life Catherine McGowan. In this union they had three children Carroll, Gary and Carolyn. He was employed at Bethlehem Steel where he worked until retirement. After retirement, because he couldn’t sit down, he worked at Musselman’s Dodge Automotive and Edmondson Village Medical Center. Carroll was well-known in the Edmondson Village Community, he gained friends everywhere he went. He was a devoted loving husband, father, grandfather, brother and uncle. He loved spending time with his family and friends. His comedic humor always had everyone he was around laughing, most times until we cried. He was a hard worker and a great provider to his family. He brought so much wisdom to those around him. His love for sweets was a huge treat to his grandchildren because he made sure they all got to partake in all the sweet treats they wanted. Later in life, Carroll became a member of First Apostolic Faith Church where his wife, mother-in-law and sisters-in-law were also members. He also sang on the church choir, hmmmm who would have thought he could sing? He was so proud to sing for the Lord. After he was unable to drive to church on Sundays, he began to listen to hymns and oldies but goodies on the radio – which he enjoyed listening to on his front porch with his wife. Carroll also loved baseball, football, and horse racing; he was definitely a “Man’s Man”. Oh, and let us not forget his favorite show Hopalong Cassidy and any other Western. Carroll departed this life on May 25, 2021. Carroll was preceded in death by his mother and father; his wife Catherine Holmes; his son Gary M. Holmes Sr.; his siblings, Ruth Davis, Stanley Holmes (Francis), Donald Holmes, Earl Holmes and Melvin Holmes. Carroll leaves to cherish his memory: his son, Carroll A. Holmes (Patricia); daughter, Carolyn L. Holmes; grandchildren, Tamara Stanley-Mack (Kevin), Candice Wise, Gary M. Holmes Jr. (Destiny) and Tony Holmes who Carroll affectionately nicknamed Boodelia, Fertus, Mooney and T Bone; his six great-grandchildren, and four great-great-grandchildren; his brother, Dennis Holmes (Delores preceded in death); his sisters-in-law Mattie McGowan and Lillian Wilson; his bonus son, Castro Skinner and bonus grandchildren, Tracy Allen, Kevin Harris and Donte’ Stokes; his nephews which he had a special bond with them all, his nieces and a host of cousins and friends

CARROLL HOLMES, son of Henry and Mildred Holmes, was born on January 7,1938. When Carroll was born the world gained someone special. Carroll was educated in the Baltimore City Public School System. In 1956, Carroll married the love of his life... View Obituary & Service Information

The family of Carroll Holmes created this Life Tributes page to make it easy to share your memories.

CARROLL HOLMES, son of Henry and Mildred Holmes, was born
on...

Send flowers to the Holmes family.