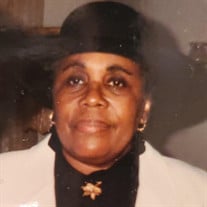 CARRIE LOU COUSAR (nee Gamble), daughter of the late Tommie and Sallie Harrison Gamble, was born on June 8, 1917, in Sumter, South Carolina; the third of fifteen children. On July 10, 2021, with her daughters at her side, our beloved mother, grandmother, and aunt peacefully completed her 104-year journey; God called her to spread her wings and come on home. Raised in Sumter, Carrie received her education in the local school system, attending the Goodwill Day School in Mayesville and was a member of the family church, Mt. Sinai A.M.E. Church. Arriving in Baltimore in 1941, Carrie held a number of positions in the clothing manufacturing industry, retiring from London Fog in 1981. After relocating, she remained a long-standing member of the family church, and in or around 1968, found a local church home at Sweet Hope Free Will Baptist Church, where she served on the usher board for many years and remained a faithful member. Ever the trailblazer, Carrie was the first of her siblings and close friends to move to Baltimore. Many of them soon followed, finding a warm spot to land in her home until they found work and homes of their own. Family defined Carrie. She wed the late Elon B. Cousar and from that union eight children were born. The anchor of the family, she founded and upheld many long-standing traditions; one of the most widely known was the vast yearly Christmas baking, when she would bake a multitude of assorted cakes and cookies for the entire family. Carrie was a true renaissance woman with a heart of gold, a razor-sharp wit, a great memory, and unparalleled organizational skills. She was the family historian, a fashionista and seamstress, an excellent cook and baker, and an avid gardener, all whilst taking care of her children and grandchildren. She was also the family counselor, offering a shoulder to lean on and sound advice to all that sought her wisdom. Whenever asked about the secret to living a long life, she would respond, “Be nice to everyone. ” Carrie leaves an indelible legacy. She was preceded in death by her parents, Tommie and Sally; fourteen siblings, James, Malachi, Hardie, Taylor, Timothy, Shulah Marion, Wilson, Pearly, Lenora, Louise, Anna, Olivia and Mary; her husband, Elon B. Cousar and four sons, Curtis, Elon Jr., William, and Terry. Left to cherish her memory are her son Berman, daughters, Letha, Patricia (Donald), Janet (James); grandchildren, Delvonne (John), Kenneth, Mary, Mark, Chantille and Jody; great- grandchildren, Shane, Anthony, Elona, and Desney; a much-adored village of nieces and nephews, and a host of other loved relatives and friends

CARRIE LOU COUSAR (nee Gamble), daughter of the late Tommie and Sallie Harrison Gamble, was born on June 8, 1917, in Sumter, South Carolina; the third of fifteen children. On July 10, 2021, with her daughters at her side, our beloved mother,... View Obituary & Service Information

The family of Carrie Lou Cousar created this Life Tributes page to make it easy to share your memories.

Send flowers to the Cousar family.