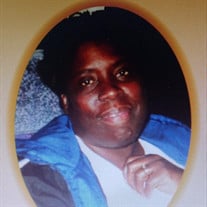 MRS. CAROLYN PATRICIA WATERS (nee Smith), of Baltimore, Maryland, made her transition on Monday, August 30, 2021. She was 70. Carolyn was born August 18, 1951, to Leroy Clarence Smith and Mabel Smith in Baltimore, Maryland. As one of seven children, Carolyn grew up in a home full of love. Carolyn received her education from The Baltimore City Public School System. She graduated from Paul Laurence Dunbar High School. Carolyn started her employment career working for Stella Maris as a dietitian. She later became an Administrative Assistant for Greater Baltimore Medical Center and continued that career path with The Baltimore City Crisis Center; from which she retired. Carolyn strove to shine her light in each career environment and is remembered fondly by her former coworkers. Carolyn had many interests which included singing, doing crossword puzzles, and watching reality-based shows, such as “Dr. Pimple Popper” and “My 600 lb Life”. She also loved reading the Bible, and spending time with her granddaughter, Ericka. Carolyn especially enjoyed attending Manna Bible Baptist Church, with her husband Ronnie Waters Sr. Carolyn met Ronnie Waters Sr., and his son Ronnie Jr., in 1985. She and Ronnie Sr. married on September 18, 1995 and have been married for nearly 26 years. Carolyn is survived by her loving husband, Ronnie Waters Sr.; her son, William Smith (Simone); her sisters, Estelle Williams, Catherine Williams, Joann Smith, and Gloria Smith; and granddaughter, Ericka M. Smith. She is also survived by her mother-in-law, Olivia Waters; her stepson, Ronnie Waters Jr. (Denise), and his children, Denise, Denora, and Devon Waters; along with a host of nieces, nephews, and friends. She is preceded in death by her parents, and two brothers, Leroy C. Smith Jr. and William B. Smith.

MRS. CAROLYN PATRICIA WATERS (nee Smith), of Baltimore, Maryland, made her transition on Monday, August 30, 2021. She was 70. Carolyn was born August 18, 1951, to Leroy Clarence Smith and Mabel Smith in Baltimore, Maryland. As one of seven... View Obituary & Service Information

The family of Carolyn P. Waters created this Life Tributes page to make it easy to share your memories.

Send flowers to the Waters family.