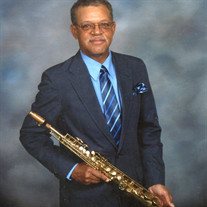 Treasured Legacy Carlton Andrew Ayles began his life on February 2, 1944 in Philadelphia, Pennsylvania at Woman’s Medical Hospital. He was welcomed to our world by his proud parents Littell J. Ayles and Helen T. Ayles. He attended Webster Davis Elementary school, and that is where he met his first love at 9 years old “The Saxophone.” Samuel Grant his first band teacher recognized a diamond in the rough and motivated him to play the instrument. He also started playing Sandlot Football when he was 12 years old as a right linebacker. In addition to perfecting his saxophone skills, he continued playing football at Armstrong high school in 1959-1960 He graduated with the class of 1961. After graduating from High school, he attended Virginia Union and Sargeant Reynolds, majoring in Business. Carlton started becoming influenced by the jazz greats, Stanley Turrentine and Gene Ammons. The first band that he joined was G.C Coleman & the Soul Twisters. In 1965 he joined Mike Harrison & The Imperials. He had success with this band until he was drafted by the U.S Army in 1967, and in November of that year he also married Veda Sykes. Carlton was deployed to Ascom, Korea, and stationed in Pyongtaek, Korea at the Surface to Air Missal base. Sargent E5 Ayles returned to the U.S. and was stationed at Homestead Air force base in Florida for 9 months prior to returning to Richmond. In 1973, upon his return from the Army, Carlton remained determined in developing his craft. He joined a very popular band called “Brother Love.” After creating a fan base of jazz enthusiasts, he later formed his first group the “Carlton Ayles Sextet.” This group included some of the top jazz musicians in Richmond, Peyton “P.J” Johnson (trumpet), Debo Dabney (piano), Jan Simpkins (base), Al Waters (Sax/flute) and Reggie Smith (drums).The chemistry was undeniable among them, and they built a huge following of fans. The band became very well known for their exceptional, hard driving jazz performances. In addition to Carlton’s years as a musician, he worked for United Virginia Bank (now Suntrust Bank) for 20 years as a Receiving Clerk. Later in life, Carlton enjoyed playing golf and became very competitive. Hitting “a hole in one” during one of the tournaments he played in was one of his proudest moments. He really loved and was a loyal long time member of Club 533, where he really missed spending time with his club member family. He had a zest for life and was all about family, and that was evident when he became a caregiver of his Mother during her senior years. He loved attending Sunday Mass, being around laughter and the camaraderie of friends. Carl was also a die-hard Dolphins fan and enjoyed cheering on his team with family and friends. He was predeceased by sister Gwendolyn and brother Littell, Jr. Carlton leaves cherished memories to his niece Monica; nephews, Eric and Donald Jr.; a host of other relatives and friends.

The family of Carlton Andrew Ayles created this Life Tributes page to make it easy to share your memories.

Send flowers to the Ayles family.