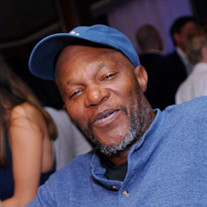 On Monday, March 1, 2021 at 11:00 pm, at the University of Maryland Medical Center in Baltimore, Maryland with his family at his side, Carlos A. Cox quietly entered into eternal rest. Carlos A. Cox was born in Louisville, Kentucky on November 16, 1958. He is the eldest of four children born to Jessie Ann Cox. He attended Shawnee High School in Louisville, KY before joining the United States Army Reserves. After his military tour of duty, Carlos moved and lived in various cities like Chicago, Milwaukee, Los Angeles, Phoenix and finally settling in Baltimore, Maryland. The last city he would call home. Carlos worked on the Baltimore docks unloading foreign cars from around the world for almost 15 years. Carlos lived his life the best way and the only way he knew, cool, calm and collected. His daughter, Carmen would describe her dad as funny, brave, strong, helpful, and a hero, but most of all her best friend. In her darkest moments, her daddy, was the hero who came to her rescue. He was an awesome father and grandfather that everyone loved and admired. Carlos married Charlene Cook on Saturday, July 22,2006 in Baltimore, Maryland. We will miss our brother, father and husband who was always available to his children, grandchildren, immediate and extended family. He adored his family and cherished his friends who span from the West to East coasts of the United States. His will be dearly missed but his presence will be forever etched in our hearts. His coolness, smile, laughter and comedic jokes will be stained in our memories for as long as we can remember. Left to cherish his memory are: a devoted and heartbroken wife, Charlene Cook, three brothers Owen Gore, Frank Murphy and Brian Kimball (Monet); daughters, April Washington (Jimmy), Carmen Gardner, and Linda Cox and one son Christopher Washington; stepson Troy Cook and a host of grandchildren and great grandchildren who will pass his life story on to generations yet to come. Thank you, Carlos, for being the spark in our hearts that made us smile when we were down and the motivation to keep moving on when times were hard. You are forever loved

On Monday, March 1, 2021 at 11:00 pm, at the University of Maryland Medical Center in Baltimore, Maryland with his family at his side, Carlos A. Cox quietly entered into eternal rest. Carlos A. Cox was born in Louisville, Kentucky on November... View Obituary & Service Information

The family of Carlos A. Cox created this Life Tributes page to make it easy to share your memories.

Send flowers to the Cox family.