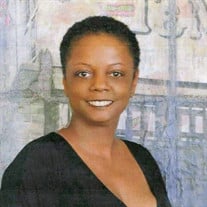 CAMILLE SUZANNE GUSTUS-QUIJANO (known affectionately as Missy to her childhood friends and family) was born December 8, 1969, in Baltimore Maryland at Greater Baltimore Medical Center to loving parents Harvadene Gustus and Roy Edwards. When Camille was two years old, Harvadene remarried, and Rudolph Gustus became her bonus dad. Growing up, Camille attended Garrison Forest School, graduating with the class of 1987. She earned both her bachelor and master’s degrees in Fine Art with a concentration in photography from the Maryland Institute College of Art. At 23, Camille met her husband Fernando Quijano and together they raised her stepsons Fernando and Cristiano. After 18 years of marriage, they separated but Camille still remained connected to her boys who are now grown men with families and children of their own. During her lifetime, Camille traveled the world studying art and carrying out one of her favorite pastimes, shopping. In addition to her love and passion for photography and mixed media, she was the quintessential “foodie”. Camille independently studied Culinary Arts and loved nothing more than preparing dishes that danced on the palette and made taste buds sing in delight. Her greatest joy came from discussing unique ingredients and observing people’s smiles as they reacted to each bite. Camille was the ultimate convivialist who would encourage people to not just appreciate the arts but to explore their emotions, engage their senses, and truly feel the power and symbolism of each piece or design. With a photographic memory, Camille neither missed anything nor did she forget anything. Each day, she set her intentions to spread her love for life and the arts with anyone willing to listen and learn. Camille’s artistic talent was noticed from a very young age. As she evolved into a mixed media artist, she used photography as a tool to tell stories. Camille expertly captured photographic moments and created various techniques to add to the images and her process. Through her work and genius, she not only brought images to life but often presented them from a 2-and 3-dimensional perspective. Acknowledging her photographic expertise and eye for the uncommon, Camille’s work was recognized in a book curated by the Smithsonian Institute entitled, “Reflections in Black: A History of Black Photographers.” Specifically, this book documents the history of black photographers from 1840 to the present wherein Camille was listed as one of the rising young African American Photographers. Camille’s work was also brought to the forefront here in Baltimore when she was recognized by the Frederick Douglass - Isaac Myers Maritime Park with a one-woman gallery exhibit. For the exhibition, Camille chose to feature her series entitled “Corner Store Prophesies” where she used mixed media to celebrate the traditions and nostalgia of local corner stores throughout Baltimore City. Camille’s series on display at the museum was also incorporated into a tour when Prince Edward of the British Royal Family visited Baltimore. Camille was not only an amazing artist in her own right, but she was also extremely passionate about teaching. She taught photography for over 20 years, 15 of which she spent at the McDonogh School. In her role as the Director of the Art Department, Camille was able to showcase the work of her students and broker numerous opportunities and platforms to honor their creations as contemporary artists. As such, Camille (also known as “Q” to her students) initiated a partnership between the McDonogh School and the Walters Art Museum. Once the agreement was ratified, Camille had developed a complete program wherein the artwork of graduating seniors was professionally installed and highlighted at the Walters Art Museum every year. Sadly, and reluctantly, Camille stepped down from her position as Art Department Director in 2018 due to health concerns. Camille’s passion for the arts often spilled over into the community. This was evident when she presented the G&M Regalia Art event at MICA in 2017. With the vision and heart of a true artistic impresario, Camille curated and organized an evening of art wherein she asked that we “… experience The Regal” which provided a multi-room display of work by local artists who shared their creations with attendees. Giving back to the community and maintaining support for the arts, the proceeds of the Regalia were donated to Wide Angle Media which is a program in Baltimore City that teaches young people about the art of photography and videography. In just 51 short years, Camille accomplished so much, poured her talent into so many, and showered people—friends, family, colleagues, and acquaintances – with her own unique brand of authentic love…Camille did this like no other. Camille has been welcomed to heaven by many ancestors: Harvadene Gustus (Mom), Rudolph Gustus (Stepdad), Susie & Roger Ross (maternal grandparents), Susie & Joseph B. Edwards, Sr. (paternal grandparents), James & Ida Gustus and Hilda & Bill Quinn (step grandparents), and a host of aunts and uncles. Camille leaves in mourning: her father, Roy Edwards; her sisters, Angela Gustus (her “Big Little Sister”) and Katrina Edwards; her sister-in-law, Cathy Mays; her nephew, James Gustus-Dunson; two stepsons, Fernando Quijano and Cristiano Quijano; six step grandchildren; cousins, Alisande Brooks, Collette Curtis, Courtney Ferguson, Tonya Creek, and many more; her godparents, Barry and Carol Chodak; and her godsister, Jena Crable, and two godbrothers, Gabriel Greenberg and Pearson Chodak. Last but definitely not least, a host of friends who were all like family to Camille.

The family of Camille S. Gustus-Quijano created this Life Tributes page to make it easy to share your memories.

Send flowers to the Gustus-Quijano family.