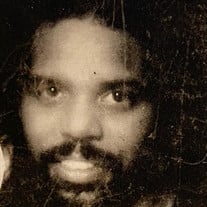 CAMERON EVERETTE BROOKS, of Baltimore, Maryland , passed away peacefully at his home on Sunday February 21, 2021 in the presence of his devoted mother. Beloved son born on February 27, 1962 to Mildred and Houston Brooks in Baltimore, Maryland. Cameron grew up in the Northwood area. He attended Northwood Elementary and graduated from Northern High School. All his classmates in the area loved Cameron. Cameron was employed for 20 years Lincoln Medical Center and the Marriott Hotel for 10 years until a severe hand injury left him disabled to work again. At an early, Cameron professed his faith in Jesus Christ. In his later year's he re-dedicated his life to Christ and knew, the angels were preparing him for his transition to be with his Heavenly Father. Cameron was a member of Little Ark Missionary Baptist Church known today as Ark Church where his mom and dad currently attend In 1989, Cameron married the love of his life Anita Jeffries (Brooks). They were very close and although theirs lives went in different directions, they had an everlasting bond. Cameron and Anita ended up being best of friends. They talked often and she lovingly cared for bringing him food and anything he may have needed until his transition. Cameron loved to spend time with family and always stayed close to home. He enjoyed watching westerns and games shows. His greatest enjoyment was spending time nurturing his great niece Shi-Niyua who called him daddy because because he was the only dad she knew. He loved her so much with her twin sister Shi-Mirror and Shi- Kyme. Cameron was the kindest, compassionate lion of an angel that ever lived. He would do anything you asked him without hesitation. He spent time with his sons and was delighted to reunite with his oldest son Cameron in his final days. He loved his mother dearly whom he considered her strongest, bravest, loving, spiritual woman in his life. She enjoyed taking care of Cameron. He leaves precious memories to his parents, Mildred Brooks Ludlow (Manson) and Houston Brooks; 3 sons, Cameron of Houston, Texas Bryan and Cameron III of Baltimore, Maryland; 2 grand-daughters, Bre'Asia &Marley of Texas. 1 brother, Eugene Wise; 1 sister, Michelle Holloway (Ernest); 2 brothers and 1 sister preceded him in death, Jeffrey, Marvin “Jay”,and Sonia; 1 uncle, Elder William Reason (Emma); aunts, Wanda Wilson, Shelby Penn, Beulah Wilson & Marleen Shakir of Texas; godfather & faithful friend, Dr. Larele Kelly & Dr. Jessica Kelly: 1 special cousin, Reginald Wilson; a host of nieces, nephews, great nieces and great nephews; devoted friends from Winford Road, and all his home boys who checked on him frequently.

CAMERON EVERETTE BROOKS, of Baltimore, Maryland , passed away peacefully at his home on Sunday February 21, 2021 in the presence of his devoted mother. Beloved son born on February 27, 1962 to Mildred and Houston Brooks in Baltimore, Maryland. Cameron... View Obituary & Service Information

The family of Cameron E. Brooks created this Life Tributes page to make it easy to share your memories.

Send flowers to the Brooks family.